I have long been struck by the profundity of Star Wars’ vision of redemption. While many Christians treat it as a given that the casting of Satan, Hitler and perhaps the majority of human beings into a lake of fire for eternity is a satisfactory outcome, Star Wars offers – as do some Christians – a vision in which the effective way to overcome evil is not to kill the enemy but to win them back from evil to good. And thus I loved this poster which Mason recently shared: 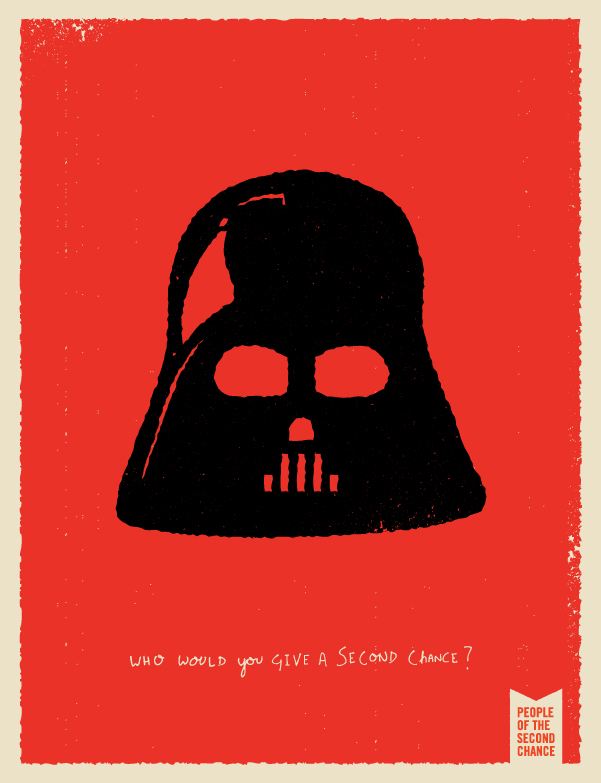 It is from the web site of a group called “People of the Second Chance.” The web site comments on the poster as follows:

In Hollywood history, Darth Vader is ranked as one of the biggest bad guys of all time. There has never been a more cold-blooded killer.

This guy didn’t even blink when deciding to destroy the entire planet of Alderaan and its inhabitants with the Death Star.

And yet, even Vader found redemption. Why? Because Luke Skywalker believed that there was something more than just hatred behind that black mask and respirator.

I’ve shared thoughts about this before. But seeing this poster, and watching the emphasis on the redemption rather than punishment of Melody Pond in “Let’s Kill Hitler,” I thought I would repost something I wrote several years ago:

Origen famously created controversy in his day by merely speculating on the possibility that even the devil could be saved. It is important to ask why this idea should be controversial in a Christian context. Allegedly, Christianity is all about redemption, about the possibility of those living in darkness seeing the light and changing direction. Yet even today a question about praying for the devil on Yahoo! Answers meets with either surprise or the response ‘there would be no point’.

I was struck when teaching a course on South Asia in which we read the Ramayana how, after the hero Rama defeats the demon Ravana, he sees the latter’s inner self, with the selfishness and bitterness burned away in the battle. Similarly, Star Wars presents Luke Skywalker redeeming his father, even though even Anakin himself is persuaded that it is too late for him. Yet reading John 8 once again as we reached that passage in the Sunday School class I teach, I couldn’t help noticing how absolute (almost Zoroastrian) its depiction of the devil is – a liar and murderer “from the beginning”, which I suppose could mean from creation (as in the Life of Adam and Eve), but sounds like it is simply saying ‘he was always that way’.

The Biblical writings do not have a consistent doctrine of Satan or ‘the devil’ – most of it is based on the application of texts from Isaiah and Ezekiel that originally referred to the kings of Babylon and Tyre to a fallen angel. So perhaps it is not that surprising to find that there isn’t a coherent view of what it would mean to hope for the ultimate reconciliation of all things either.

Not all sci-fi reflects a stance that evil should be overcome through redemption rather than destruction. Indeed, lots of sci-fi is shoot-’em-up battles between (usually human or humanoid) good guys (with or without white hats) and alien bad guys. But that’s all the more reason to take notice of exceptions such as Star Wars and Doctor Who.

Which sci-fi depictions of redemption, if any, do you find profound or significant, and why?

August 29, 2011 2001 Reasons to Buy Religion and Science Fiction: It Will Transform Your Species
Recent Comments
4 Comments | Leave a Comment
Browse Our Archives
get the latest from
Religion Prof: The Blog of James F. McGrath
Sign up for our newsletter
POPULAR AT PATHEOS Progressive Christian
1