Doctor Who has done (and most likely is continuing to do) something that LOST could have done had it had the foresight. On LOST, the only point at which time travel actually resulted in something we had already seen previously on the show was when Flocke took Richard to talk to Locke and deal with his wound. On Doctor Who, we have already seen a time travel loop used to good effect, when the Doctor, having left Amy with her eyes shut, suddenly reappears in a different jacket to talk to her again, a scene that we get to see from a different angle in a later episode, and learn was the Doctor from the future having come back to talk to her.

If you have not seen “Let’s Kill Hitler” and wish to avoid spoilers, either stop reading now, or read and then if necessary travel back in time to erase all memory of having done so. 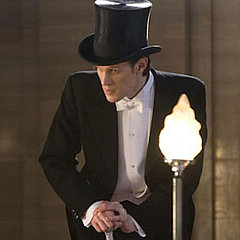 Many fans have noticed the clothing that the Doctor wears in “Let’s Kill Hitler.” At the beginning, he has a new jacket, and after being poisoned, he reappears wearing a tuxedo.

We saw him in a tuxedo at Rory and Amy’s wedding, and it has been suggested that in fact the Doctor we see in the tux in “Let’s Kill Hitler” had just come from and subsequently returned to the wedding.

I wonder if we’ll find out that the Doctor who appears in the tux in fact was not the Doctor having been poisoned, but the Doctor from an earlier time, called by his later self to substitute. Once Melody Pond passes on the regeneration energy to him, he will be able to use it to save his earlier self – or perhaps do something even more interesting.

What if the poisoned Doctor cannot be saved, and so is the one who dies on the beach in the Impossible Astronaut, and he is the Ganger Doctor? Then perhaps the Doctor who lives and has Melody Pond’s regeneration energy can indeed travel through time and rewrite history, passing that regeneration energy back to her after she is killed in the Library.

Maybe the show will do something rather different than what I am suggesting, but it is clearly doing something interesting with interlaced time travel. Such stories take a lot of forethought and careful planning, but they are worth it.

What do you think the show is going to be doing with such time travel possibilities?

August 30, 2011 "I Want You" by Daniel D
Recent Comments
28 Comments | Leave a Comment
Browse Our Archives
Follow Us!