Closing Time for Doctor Who? Silence Will Fall 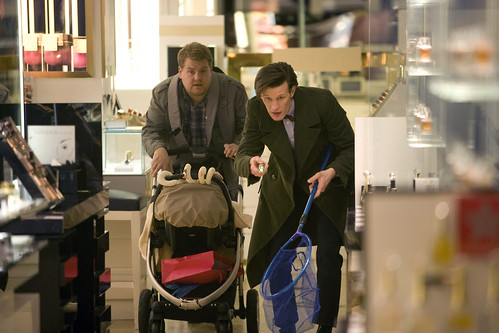 Today’s episode of Doctor Who, “Closing Time,” brought together everything that we love about the show: the Doctor swinging back and forth between cocky overconfidence and severe self doubt, robot dogs, Cybermen turning up in unexpectedly ordinary places, mysteries about the Doctor’s past and future, and an abundance of humor as the Doctor says and does things in his own entertaingly bumbling yet super-effective way. There was nothing in that last sentence that really gives anything away that wasn’t already seen in the trailer last week. But in what follows, there will indeed be spoilers.

The Doctor, a bit like his “collecting his reward” at the end of the Tennant era, seems to want to just pay visits to people he’s known before and say his goodbyes, this time for good. While it would have been very cool to see him visit some of his earlier companions or even his granddaughter, what we get in his visit to Craig (from the episode “The Lodger”) is so delightfully entertaining that I doubt any fan would pick an imaginary alternative over what we were offered. The Doctor encounters Craig taking care of his baby on his own for the first time when Sophie goes away for a few days. We learn that the Doctor understands baby, and Craig and Sophie’s baby Alfie actually prefers to go by the name “Stormageddon, Dark Lord of All.” The Doctor at one point will “comfort” the baby by pointing out that mortgage payments and various other things including “a nagging sense of spiritual emptiness” still lie in the future, and so it is better to save the tears until then.

Does the Doctor know something about a sense of spiritual emptiness? Craig certainly gets one bit of diagnosis right: “He needs someone. He always needs someone. He just can’t admit it.” (See too this piece about the episode, which makes comparisons between the Doctor and Christ in Gethsemane, as well as a fan’s account of how Doctor Who became his religion).

When Craig notices that the Doctor and alien trouble always seem to appear together, the Doctor says it is coincidence, which defines as “what the universe does for fun” – which is immediately followed by his spotting Amy and Rory there in the store where most of the interesting action in the episode occurs. What Amy has been doing since returning to Earth and her own time – and the slogan that accompanies it – is significant.

We also see the Doctor bringing a companion (or should that be partner?) to the brink of death/assimilation to cybermandomhood, but as ever, love saves the day.

The episode draws to a close with some poignant connections with the first episode in the season, and presumably also with the next one. The Doctor takes some envelopes from Craig’s house, and when he tells Craig that he will be going to America, Craig provides him with a Stetson.

But the very end of the episode has the adult River Song reading the accounts of three children who saw the Doctor on that fateful day, written later as adults. She has just become a Doctor – which I suspect is supposed to connect her with the Doctor. Madame Kovarian shows up with the Silence, who are described as her owners. River Song doesn’t remember her or them, since she was programmed not to, but a few helpers bring in an astronaut suit, and the next shot we see is of River Song in the astronaut suit underwater.

Since we have already been told that there will be a Christmas special, one possibility – that the Doctor really does die, without regenerating, and thus the longest running science fiction show comes to an end – seems to be excluded. And so the key question seems not to be “Will the Doctor survive?” but “How will the Doctor survive?” Will time be rewritten? If, as some of us have suspected, the Doctor who dies is the Flesh Doctor, that would be fitting, since the Doctor would then outsmart the Silence and Kevorian precisely as they outsmarted him twice. But would that not mean that we have been watching the Ganger Doctor for much of this season, just as we did with Amy without realizing it?

The Doctor apparently has questions, and so do we. How many will be answered a week from today? And is the bigger question how the Doctor will cheat death, or will the Doctor and River Song get married?

September 25, 2011 The Oldest Question in the Universe (It Has Indeed Been Hidden in Plain Sight)
Recent Comments
14 Comments | Leave a Comment
Browse Our Archives
get the latest from
Religion Prof: The Blog of James F. McGrath
Sign up for our newsletter
POPULAR AT PATHEOS Progressive Christian
1