Doctor Who: The Keys of Marinus

The planet Marinus, the Doctor and his companions learn not long after arriving there, has a fascinating history. The people of the planet created a sophisticated computer that could serve as the perfect judge and administrator. Then they found that it could even do more – it could control the minds of people and eliminate all evil from society. As a result of this “Conscience machine” the planet became unique, knowing no war, theft, murder, or anything else of the sort for centuries. But then someone figured out how to circumvent the computer’s control, and began to rob and plunder.

Since then the machine has been inoperative. A set of keys that will allow the device to be reactivated have been hidden around the planet. The Doctor and his companions are forced to find them, their TARDIS being kept behind a force field until they return with the keys. They are given instead travel disks that will allow them to be transported instantly to the places where the keys are hidden.

Those who know the “Key to Time” series of episodes from the Tom Baker era will undoubtedly wonder whether the revisiting of this plot device was done consciously.

At the first of their stops, the travelers encounter a place where deep hypnosis is used in Matrix-like fashion to enslave people and persuade them (conversely to the Matrix) that they live in a perfect society and are given everything they desire. At another, they find a fake key in the possession of an idol. 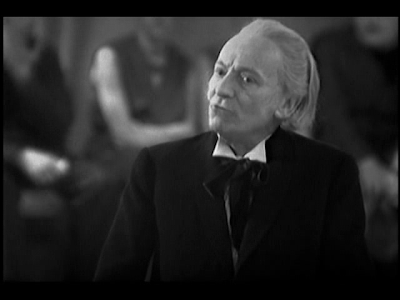 The travelers are separated for two whole episodes in which the Doctor does not even appear. This seems to confirm the view of the Doctor as originally having been that of a mysterious alien traveler through time and space whose role in the show is to facilitate adventure for the human characters. Calling the show “The Ian and Barbara Show” would not have been nearly as catchy, nor survived the change of companions. But the character of the Doctor has always been a means to an end, as a mysterious figure association with whom leads to interesting experiences.

A comparison with the role of deities in human religions might be instructive. If we are honest, are gods in classic religious literature and thought likewise primarily devices to provide adventure for human beings, to facilitate our success, rather than truly being central in their own right? Do not most deities spend much of their time hidden from view?

Returning to “The Keys of Marinus,” eventually the characters find themselves in a situation in which Ian is framed for murder as well as theft of the final key. The Doctor serves as his defense attorney, but even in this circumstance it is Barbara and others who really save the day.

I was struck by the Doctor’s positive statements about skepticism in this episode, in view of the negative ones attributed to him in the novelization of “The Daleks.” That novelization, as you may recall, provides an alternative version of how the characters on the show meet. What the Doctor actually said in “An Unearthly Child” is more compatible with what he says in this episode. Here’s a quote from the script of “An Unearthly Child”:

IAN: Let me get this straight. A thing that looks like a police box, standing in a junkyard…it can move anywhere in time and space!?
SUSAN: Yes!
DOCTOR: Quite so.
IAN: But that’s ridiculous!
SUSAN: (Exasperated, to the DOCTOR.) Why won’t they believe us?
BARBARA: Well, how can we?
DOCTOR: (He puts his hands on SUSAN’S shoulders.) Now, now, don’t get exasperated, Susan. Remember the Red Indian. When he saw the first steam train, his savage mind thought it an illusion too.
IAN: (Stung at the comparison.) You’re treating us like children!
DOCTOR: Am I? The children of my civilisation would be insulted.

In “The Keys of Marinus” the Doctor mentions Pyrrho, the founder of skepticism, and when someone says that it was good that the Doctor had read Pyrrho, the Doctor responds by saying that he didn’t read him, he met him.

The episode ends with the “Conscience machine” being destroyed through Ian’s quick thinking and insight, as the machine had come to be in the wrong hands. The Doctor wraps things up with a reflection on his belief that humans are not meant to be controlled by machines, since machines aren’t capable of justice, only humans are.

He says farewell to one of the people that had been connected with them on this adventure by saying “Bless you, my child.” An interesting expression of religious sentiment on the Doctor’s part, don’t you think? I wonder how much or how little thought went into that particular line of the script.

The next episode will be “The Aztecs.” Before ending this post, I will also mention that I came across a blog on the subject of Doctor Who which has a very unfortunate, if inadvertent, web address…

Ask Better Questions
"The important thing is to never stop questioning."  - Albert Einstein I...
view all Progressive Christian blogs
What Are Your Thoughts?leave a comment
Copyright 2008-2021, Patheos. All rights reserved.