Mark Goodacre has two posts up that are relevant to oral tradition and the historical study of Jesus. One is about a quotation attributed to the Dalai Lama on the internet but which is spurious. Here’s the image that sums the matter up: 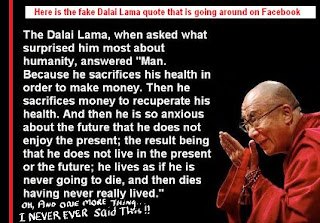 A while back I had wanted to share this quote, which is widely attributed to Stephen Hawking, but ultimately decided not to because I was unable to trace it to an actual source:

What can we learn from the proliferation of spurious internet quotations attributed to famous people? Perhaps something encouraging, since those that diverge from the authentic voice of the individual in question tend to get spotted and challenged, while those that persist tend to be ones that are in keeping with the sort of thing that the person might be expected to actually say. And so, if looking at internet “quotations” challenges the notion that we can get the ipsissima verba of Jesus, it also leaves the hope that the ississima vox might not be completely lost to us.

The image below is my favorite response to the proliferation of spurious quotations on the internet:

In another relevant post, Mark Goodacre mentioned the “Matthew Effect” – which is actually directly relevant to the subject of oral tradition and historicity. As I posted once before, “in their book on Rumor Psychology

Nicholas DiFonzo and Prashant Bordia mention the concept of “Matthew Accuracy”. Deriving its name from the principle in the Gospel of Matthew that “to the one who has more will be given, but from the one who does not have even the little he has will be taken away”, Matthew Accuracy denotes the tendency of truthful rumors to become more truthful, while false rumors tend to become more false (pp.152-4).” I have often wondered whether that tendency applies to a first century Mediterranean context, and if so, whether it can be a useful tool when sifting through material in the Gospels.

Now I also wonder whether the proliferation of spurious internet quotations proves that the concept of “Matthew Accuracy” is wrong.

October 16, 2011
Longing for Magic and Miracle (Is Science Fiction Simply Fantasy?)
Next Post