Dinosaurs in the Book of Job?

A question came up on Facebook about the genre of the Book of Job in the Bible. It is mostly poetry. You can tell in most English Bibles by the formatting on the page. The two line units, with the second line indented, and “thought rhymes” (matching or contrasting ideas) in both of the two, are the parallelism that is the most characteristic feature of Hebrew poetry.

I have yet to meet someone who truly thinks that the book is a historical report of Job and his friends sitting around actually speaking to one another in poetic verse. But I’m sure such people are out there, somewhere.

In the discussion I mentioned on Facebook, it also came up that creationists have claimed that dinosaurs are mentioned in the Bible, in particular in the Book of Job.

That’s not impossible, but it doesn’t mean the creationists are right. Let me explain. 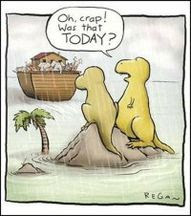 Adrienne Mayor, in her book The First Fossil Hunters: Paleontology in Greek and Roman Times,

suggests that stories of mythical creatures such as dragons may have arisen in ancient times as a result of humans happening across enormous skeletons of dinosaurs and other such creatures.

If she is right, it could well be that the references to Leviathan and Behemoth in the Book of Job do owe something, directly or indirectly, to dinosaurs. One can entertain this possibility without treating the Flintstones as historical reporting in the way young-earth creationists do. It could be that discovery of fossils of dinosaur bones led to the myths about such creatures.

On a related note, one dinosaur that tends to get mentioned nowadays in this context is one that has lovingly been dubbed dracorex hogwartsia, and it has been on display in recent years at the Children’s Museum of Indianapolis. One look at it and you’ll immediately notice the resemblance to the mythical dragon which resulted in it getting this name: 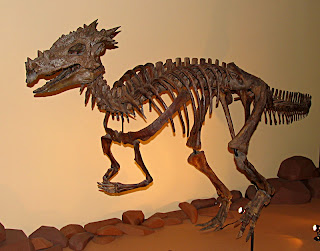 November 29, 2011 Scotty in Hell
Recent Comments
12 Comments | Leave a Comment
"Wasn't even aware of it."
James F. McGrath Revisiting Mythicism
"Did you get a chance to read Carrier's recent rant against you? See https://www.richardcarrier...."
John MacDonald Revisiting Mythicism
"Would literalist Christians reject the contents of Q knowing that they originate with John the ..."
Barros Serrano James McGrath at AAR/SBL in Denver
"These sound awesome!"
John MacDonald James McGrath at AAR/SBL in Denver
Browse Our Archives
Related posts from Religion Prof: The Blog of James F. McGrath