Doctor Who: The Massacre of St. Bartholomew’s Eve

This episode from the third season of Doctor Who, “The Massacre of St. Bartholemew’s Eve

,” focuses on events in 16th century France, when the spread of Protestantism has led to tensions between Catholics and the Protestant Huguenots. Like many but not all episodes in which the time travelers land in Earth’s past, this episode focuses mostly on the actual events unfolding. The Doctor is not even present for most of the story (in two of the four parts he does not appear at all), and his travel companion Steven is the means by which the viewer gets to learn about the events that are unfolding.

When they arrive, the Doctor expresses interest in visiting a certain scientist, an apothecary named Charles Preslin who is ahead of his time in envisaging germs as the cause of disease. In the little we see of the Doctor’s interaction with Preslin, he seems surprisingly understanding of the church leaders’ suspicion of science in that period, and merely encourages him to continue his work in secret.

Protestants are referred to at times as “freethinkers” – an important reminder of how times and impressions change, and how religious traditions can go from radically challenging authority to blindly accepting new ones.

There are some powerful words from the Doctor towards the end of the last part, after having been upbraided by Steven for not trying to help the people of that time, or at least one girl whom he had met, Anne Chaplet. Here’s what the Doctor says:

My dear Steven, history sometimes gives us a terrible shock, and that is because we don’t quite fully understand. Why should we? After all, we’re all too small to realise its final pattern. Therefore, don’t try and judge it from where you stand. I was right to do as I did. Yes, that I firmly believe….

Even after all this time he cannot understand. I dare not change the course of history. Well, at least I taught him to take some precautions. He did remember to look at the scanner before he opened the doors. Now they’re all gone. All gone. None of them could understand. Not even my little Susan, or Vicki. Yes. And there’s Barbara and Chatterton… Chesterton! They were all too impatient to get back to their own time. And now Steven. Perhaps I should go home, back to my own planet. But I can’t. I can’t.

And so key questions about the Doctor and about time travel come to the fore. The Doctor cannot return to his home planet…but as yet, we don’t know why. The Doctor’s own story was often simply the means to lead others to adventure in these early seasons, and so this momentary focus on the Doctor himself foreshadows the future direction of the show, as being about the Doctor and his companions, rather than about companions of the Doctor.

He says not that history cannot be changed, but that he dares not change it…an idea that leaves room for further exploration. 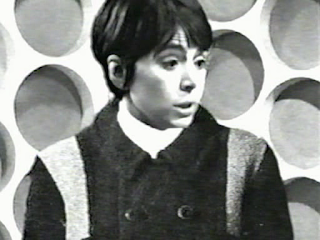 But perhaps most poignantly, an idea akin to a perspective often offered by religious believers, namely that history is weaving a story which may seem to have gone terribly awry from our limited human perspective, but which may seem different when seen in its entirety.

Presumably we are to understand that Steven gets a glimpse of that bigger tapestry as he encounters Dodo Chaplet, and thinks that perhaps she could be Anne’s descendant. If they had taken Anne from her time, and she would otherwise have remained there and survived, then such descendants as Dodo would have never been born.

We are all time travelers, even if we only move through time slowly in a single direction. And we all live in the midst of events that will one day be the past to future generations. It is our challenge to act wisely, unable to see the big picture, and seek to move history in whatever little way we can in a direction that future generations will not look back on with shame or horror, as we do on massacres such as the one that gives the title to this episode of Doctor Who.