This last episode of the first season of Torchwood, “End of Days,” focuses on precisely what it sounds like: the strange things that have been happening as a result of the rift in space and time becoming more active are being interpreted by religious groups as portents of “judgment day.” Ianto reads from Daniel, and it is suggested that it seems to fit pretty closely what has been happening, but Jack calls the Bible “superstition” and is confident that this isn’t the end of the world (after all, he has seen the future, being from there himself). 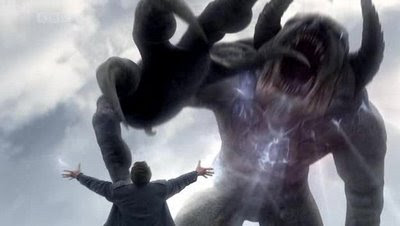 I thought about perhaps giving this post the subtitle “My God, It’s Full Of Gods!” – echoing the famous line from 2001. In “End of Days,” Torchwood reveals that the fictional universe it offers us is one that is full of demons, such as Abaddon, a creature that has been imprisoned beneath the rift in time and space that crosses Cardiff. The name of the creature is of course derived from Revelation. Bilis Manger refers to the entity as his “god.” But surely apart from such entities that remind us more of the demonic than the divine (assuming one makes such distinctions), there must be other opposing entities that are at least slightly more powerful, whoever they might be that imprisoned such a creature in the first place. Like most science fiction universes, Torchwood’s contains godlike entities.

If we can echo the phrase of 2001’s Dave Bowman in reference to the monolith, we can also echo Christian theology’s phrase and refer to “Harkness Victor.” The creature Abaddon feeds on life and brings death wherever its shadow falls. Jack Harkness kills it by overpowering it with his undying life. Jack dies, seemingly for good this time. Gwen waits for days (perhaps three?) by his body in the morgue, confident that he will “rise,” saying “I believe in him.” The echoes of Christian ideas associated with the death and resurrection of Jesus are surely intentional, as Jack’s undying life proves more powerful than a creature whose very essence seems to be death, a veritable “angel of death” – or perhaps “demon of death” would be more apt.

Ironically, the episode ends with Jack seeing his “Doctor detector” indicate that he is around, and run off and disappear, connecting the events in this episode directly to the Doctor Who episode “Utopia,” in which Jack will get to see farther into the future of the universe than any known time traveler has before.

November 4, 2011 God and Anthropomorphism
Recent Comments
2 Comments | Leave a Comment
"The discussion is not about changing weather but about the climate. I wonder how many ..."
James F. McGrath Not Liberal, Just Literate
"You believe the sky is falling? Why? The weather has always changed."
MCJ757 Not Liberal, Just Literate
"I pulled out an old book from my dad's bookshelf: "Those Incredible Christians" and its ..."
David Garshaw Peer Reviews, Pseudoscience, and Denialism
"Thanks for the preview James. I'm very excited about the book and the anticipation is ..."
Zera Preview the Mandaean Book of John
Browse Our Archives
Follow Us!