An Example of How Answers in Genesis Does Violence to the Bible, and Not Just Science

An Example of How Answers in Genesis Does Violence to the Bible, and Not Just Science December 2, 2011 James F. McGrath

Take, for instance, the parallels that scholars have identified between days 1-3 and days 4-6 in Genesis 1, illustrated best by using a chart:

The first three days feature the creation of habitats, and the next three fill those habitats with inhabitants.

Here’s another diagram that highlights the connections in slightly more detail (ironically found on a site trying to dispute the parallelism in the passage!):

Others like it can be found on various web pages as well as in books and commentaries.

Now, let’s see what happens if Answers in Genesis decides that it wants to try to co-opt this into their twisted approach to the Bible and to science: 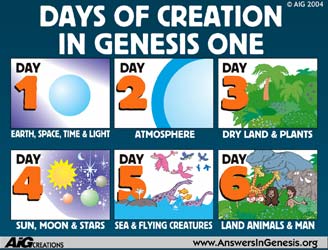 In their attempts to shoehorn science (or rather, their distorted and selective bits of science) into the passage, they make nonsense of the parallels. They not only remove the dome from day 2 (to facilitate their deceitful claim to take Genesis 1 literally in a manner that is not selective), but they focus on the creation of a habitable atmosphere in between the waters above and below on day 2, which leaves one with the impression that the sea creatures on day 5 ought to live in the sky. The Bible’s beautiful structure is treated by them as so much garbage, to be ridden roughshod over in their misguided attempt to hijack Scripture and science for their own twisted ends. Because they are not interested in exploring and highlighting what is actually in Scripture, but in using Scripture for their own ends.

Here’s another image of theirs I came across:

They misconstrue the Bible as though it were not the work of men – even though Paul doesn’t merely put his name in the author’s position on his letters, but emphasizes in 2 Corinthians 11 that he speaks there as a fool and not according to the Lord. Genesis 1, even if it were by Moses, would not then be beyond dispute, nor removed from the category of “work of a man.” But as it stands, it is anonymous, and includes elements which are pre-scientific and a structure which is naturally understood to be poetic in character, or at least not focused on chronology but rather on parallelism. Then they treat what nature – that is, from a Christian perspective, God’s creation – says as though it were mere human opinion. And the implicit message of the question at the bottom is that they are not in fact doing precisely what they accuse others of doing, namely twisting and changing scripture. Young-earth creationists take scissors and pen to the Bible (metaphorically, of course, using the Bible selectively and changing the meaning of words to suit their presuppositions), and add to this the sins of hypocrisy and lying.

Young-earth creationism is the work of charlatans who know little about either the Bible or science, and mislead the gullible. That would be sad enough. But as if their work turning the Bible and the Christian faith into a laughing stock were not enough, they also close some Christians’ ears to the voice of other Christians who actually do know something about the Bible or about the sciences. Thus they sow division in the body of Christ.

It would not at all surprise me to learn one day that key leaders in the young-earth creationist movement were atheists seeking to do harm to Christianity. If so, they have been very successful. But who knows – sometimes the foolish do great harm of their own misguided free will, saving their opponents the need to go to the trouble of sowing misinformation, falsehood and division. That is sadder still.