Discussions of Evolution and Creationism Around the Blogosphere

Here are some links to discussions around the blogosphere which connect with this blog in some way, shape or form.

First, let me link to a post by Sam, a former student of mine, whose blog post “Redoing Theology” reflects what so many of us have experienced: our views change over time, and it is appropriate for them to do so.

Next, Tony Breeden has a post that seems to be in several places around the internet. It is supposed to be a response to a post of mine about the Ark Park, but in actual fact it does nothing other than mention side issues (the shape of the ark, for instance) and repeat misinformation (the fossil record, he claims, is compatible with a global flood – which it would not be even if plants could run, which they cannot).

The news is circulating that Kentucky’s budget provides tax breaks for the Ark Park by cutting funding in education, and so the state is doing double damage to education. This led Hemant Mehta to make this cartoon: 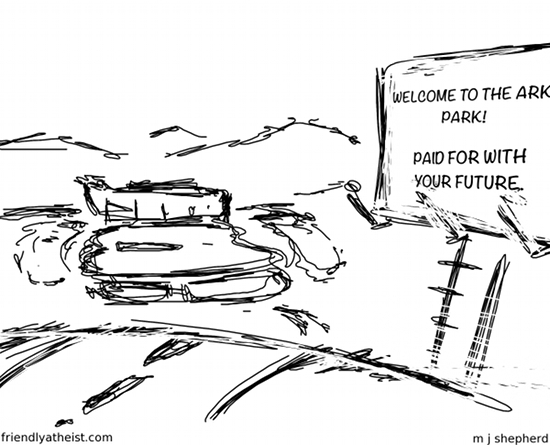 Joel Watts discusses that and a number of other topics related to Genesis 1 and evolution, including whether reading Genesis as Western-style history is antisemitic. Pete Enns wrote an article for the Huffington Post on the fact that the issue for Evangelicals regarding evolution is their mistaken expectations about the Bible. Fred Clark discusses how Ken Ham and others like him are driving people away from Christianity.

There is a great video about some misconceptions about evolution: http://www.youtube.com/watch?v=vss1VKN2rf8

Jim Kidder posted about antievolution legislation in Missouri, and there has been some discussion in various places of my op-ed piece about the proposed legislation in Indiana. Also, the NCSE has begun to focus more attention on climate change in addition to evolution.

Also about something not entirely unlike creationism is David Fitzgerald’s attempt to defend his book Nailed. He and I have had previous discussions about the subject, and his post didn’t change my impression. He continues to approach the matter in the manner of an apologist, not a historian. It remains unlikely that Josephus invented the entire Testimonium Flavianum, and that Christians writing in Syriac and Arabic quoted it from memory managing to conveniently forget precisely those details suspected of being Christian additions. There are other issues with the blog post, but the key point is that nothing he posts there even if correct makes the mythicist scenario seem more probable than that of mainstream historians. Click through and judge for yourselves.

Finally, Sabio continues his series on big and little gods, this time focusing on the relevance of what he’s written thus far for attempts to attack or defend religious beliefs.

January 23, 2012 Help Needed With The Burial of Jesus
Recent Comments
6 Comments | Leave a Comment
Browse Our Archives
Follow Us!