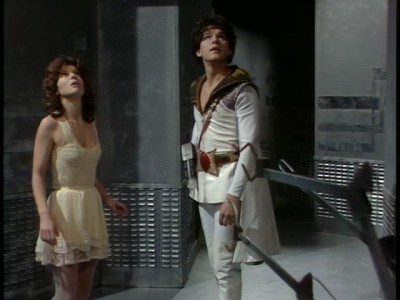 The second episode in the Black Guardian trilogy, “Terminus,” is another episode I actually remember watching in my younger years, although some of the details had become sketchy. This is an episode which features an element that is common in Doctor Who and illustrates a major contrast with Star Wars. In the latter, it is a challenge even to destroy a planet using technology. In Doctor Who, it seems that the very universe itself is in peril surprisingly frequently. This episode is no exception.

The Doctor and his companions find themselves at a space station called “Terminus” which they learn is where those suffering from Lazar’s Disease are sent, allegedly to be cured, but many suspect simply to die. The episode raises issues related to fear of contagion, ostracization, corporate greed and how it relates to hospital care and maintenance, and many others.

One intriguing element is that Terminus turns out to be at the precise center of the known universe. The Doctor eventually figures out that the station made a time jump to avoid causing widespread destruction as a result of a failing engine’s unstable fuel, and the result was the Big Bang – hence the station’s position. And since now there is another unstable engine, there could be a second big bang that would destroy everything the first one brought into existence.

The risk from another big bang appears again in “The Big Bang.”

Time travel makes possible the existence of closed temporal loops such as that envisaged here. The Big Bang is caused by a space station which is ultimately a product of the Big Bang. No need, and no room, for a Creator.

This episode witnessed the departure of Nyssa, who, having been cured by the radiation that provided a hit or miss cure to the disease, stayed behind to perfect it and help others.

The Doctor flies in to save the day, but his companions regularly show an awareness that in order to make more substantive change for a greater number of people, a longer term presence is essential.

January 6, 2012 What Did Noah Do With The Hermaphrodite, Transsexual and Other Such Animals?
Recent Comments
2 Comments | Leave a Comment
"“Often wrong, never in doubt.”I’ve seen this printed on tees, needle pointed on pillows, and ..."
Tony Wilson White Supremacy, Christianity, and the Capitol ..."
"You Da man! Did exactly what u said and it took care of the problem. ..."
Jose Beiro Solving the Annoying Flashing Input Menu ..."
"It's what I tend to call a classic Irregular Verb:I am a true patriot.You are ..."
Scurra White Supremacy, Christianity, and the Capitol ..."
"Intriguingly enough, since you mentioned "No one has suggested that Jesus was merely a carbon ..."
Chris H #JohnTheBaptist Enoch Seminar Nangeroni Meeting Day ..."
Browse Our Archives
get the latest from
Religion Prof: The Blog of James F. McGrath
Sign up for our newsletter
POPULAR AT PATHEOS Progressive Christian
1