Doctor Who: Resurrection of the Daleks

Doctor Who: Resurrection of the Daleks February 9, 2012 James F. McGrath 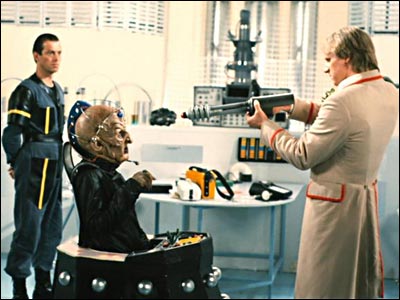 Resurrection of the Daleks is one of the darker episodes from the era of the Fifth Doctor. Once again given the opportunity to prevent the Daleks from getting a fresh start, the Doctor is determined not to miss the chance again. But the Doctor finds killing even the creator of the Daleks, Davros, something that does not come naturally to him. It is the Doctor’s inability to bring himself to carry weapons or to use them without hesitation or regret that is on of the Doctor’s consistently endearing features.

The episode thus explores an intergalactic equivalent to the conundrum of what one should do if it turned out that Hitler was still alive and, now released and freed from suspended animation, would be seeking to return to power.

Since Davros expresses the desire to rethink the nature of the Daleks, and endow them with some emotion, the Doctor finds himself hesitating. In the process, major moral questions are raised and explored, such as whether compassion is a weakness, and whether the quest for empire is universal.

The episode ends with the departure of Tegan, who, having witnessed so much death and destruction, decides that being with the Doctor simply isn’t fun any longer. The Doctor muses that he supposes he shall have to mend his ways.

February 8, 2012
Doctor Who: The Oldest Question and the Last of the Time Lords
Next Post

February 9, 2012 Teach the Hilarious Controversies
Recent Comments
0 | Leave a Comment
"You have misrepresented what I wrote again, and you insultingly suggest that as an academic ..."
James F. McGrath Five Reasons Why Mythicism is Disappointing
"Hoot!You have become a cartoon character.You only publish in blog posts? Those are the only ..."
Sandy Plage Five Reasons Why Mythicism is Disappointing
"You weren’t willing until now to talk about whether Judaeans is a better translation of ..."
James F. McGrath “To Your Tents, O Israel!” A ..."
"Okay, you have been warned about your trolling and lowering of the tone of discourse ..."
James F. McGrath Understanding Whiteness
Browse Our Archives
get the latest from
Religion Prof: The Blog of James F. McGrath
Sign up for our newsletter
POPULAR AT PATHEOS Progressive Christian
1