” sees the Doctor visit a planet he had previously been to, supposedly in the Jon Pertwee era, and involves direct references to that visit – including a mural of the Third Doctor and a locket with a picture of Jo Grant! That previous visit was not the focus of an actual earlier episode.

It is interesting to note the progression from Attack of the Cybermen (focusing on the Sixth Doctor’s connections to the first), to the Two Doctors (bringing him into direct contact with the Second Doctor), to Timelash (bringing him to a place he visited as the Third Doctor). It is as though the writers felt the need to emphasize the continuity of the Sixth Doctor with the show’s past, perhaps since he was comical in a somewhat different way than Tom Baker had been, and rather more severe at times than either of the previous two had been.

It is interesting to note that the First Doctor, arguably the most severe of all, was toned down by the time he made it to the aired pilot!

Religion features more than once in the episode. The first time as a revelation about the Doctor’s companion, Peri. When an android takes her necklace, she explicitly says that it is her St. Christopher, placing Peri in the Catholic tradition, something that had not been mentioned previously. As many readers will know, St. Christopher is particularly thought of as looking out for travelers. If I were Catholic and were traveling with the Doctor, I too would wear such a medallion.

The second time religion appears is when a character named Herbert (later not unexpectedly revealed to be Herbert George Wells) who has interest in the occult entertainingly tries to drive the Doctor (whom he believes to be an evil spirit) away with a crucifix and Bible.

The Doctor’s own status as a godlike entity is also in focus at one point when someone believes he has outwitted the Doctor, and refers to the stories about him on the planet, which characterized him as “all-knowing and all-powerful.” 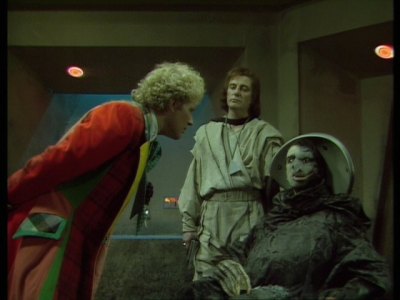 Also worth mentioning is the relative callousness of this Doctor, much more willing to kill (as he does yet again in this episode), compared to say Peter Davison’s Doctor hesitating with a gun pointed at Davros.

In addition to a connection to H. G. Wells (and making nothing specific of the people who were sent through a time corridor to 12th century Scotland), the episode also hints that the Borad, traveling through the time corridor, becomes the Loch Ness Monster. Why the Doctor is so confident that he will not cause any trouble there is hard to explain, although perhaps it is simply his confidence that he had broken the Borad’s spirit with his insults and his highlighting of how loathsome and grotesque his appearance had become.

I’d say that on the whole, puzzles and inconsistencies set to one side as they always must be, the episode works, being both comical and dramatic in classic Doctor Who fashion. What do others think?

February 21, 2012
The Beginnings of Doctor Who - and of Christianity
Next Post

February 22, 2012 What is Hard Water? (Another Clever Exam Answer)
Recent Comments
0 | Leave a Comment
"It's particularly amusing that the endorsement is attached to the KJV bible that was written ..."
rationalobservations? Warning Labels for Christianity?
"Just did a blog post trying an LGBTQ+ friendly interpretation of Christian origins. Check it ..."
John MacDonald Struggling with Homosexuality
"Probably the same religion that brought us public schools, mass public hospitals, the scientific revolution, ..."
Chris H Michele Bachmann Cites Famous Social Justice ..."
"I wonder what religion it was that was responsible for the genocide of the Native ..."
Hutchins Michele Bachmann Cites Famous Social Justice ..."
Browse Our Archives
get the latest updates from
Religion Prof: The Blog of James F. McGrath
and the Patheos
Progressive Christian
Channel
POPULAR AT PATHEOS Progressive Christian
1