Doctor Who: Time and the Rani

Sylvester McCoy is the Doctor that I have seen the least of, as of my writing this. Very few episodes with Sylvester McCoy as the Doctor had made it to America during the peak of my teenage fandom. This is not surprising, as they were very recent of just airing in the U.K. at that time.

It was strange now to watch “Time and the Rani,” knowing that Colin Baker was fired because of the direction the show had been taking and the ratings. It may be true that a regeneration was the only thing that would suffice to persuade fans that the Doctor had regained his sanity and was no longer likely to choke his assistant. But it still seems to me an unfortunate moment in the show’s history – although it is ironic to try second-guessing the evolution of Doctor Who while writing about an episode in which the Doctor stands against the Rani as she seeks to second-guess the evolution of life in the universe and where necessary rewrite its course. 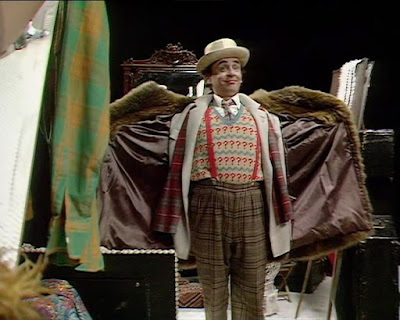 I found the change of costume scene potentially symbolically significant. There is a brief stint in a Napoleon costume, suggesting that the Doctor’s lack of humility would remain. Then we saw the Seventh Doctor in the costumes of all his predecessors except the first, with the Fourth Doctor the first he tried on, if I remember correctly, and then his actual new outfit under the Second Doctor’s fur coat. Was this supposed to indicate that the new Doctor was supposed to be funny, comical, much like the Second and Fourth more than any others? There is certainly something of Patrick Troughton’s Doctor in Sylvester McCoy’s.

I found the treatment of the notion of evil to be in somewhat stark contrast to “Trial of a Time Lord,” the immediately preceding episode, which featured the same writers – Pip and Jane Baker.

There, the Doctor’s own goodness was put in trial, and it turned out that the prosecutor was none other than the evil part of the Doctor himself. Perhaps such complexity was felt at that time to be unappealing (it has become a major element in the current show’s recent episodes). But the Doctor’s black-and-white statements about the Rani as evil and lacking in ethical scruples seemed odd after an episode that had managed to highlight that the boundary between good and evil runs not down the line between “us” and “them” but through each individual, including a figure who had begun as harsh and mysterious but had grown to be embraced as a hero, however imperfect.

Specifically on the subject of religion, the Rani’s plan is eventually shown to be the creation of a “time manipulator.” She wants to merge a mind created from combining numerous geniuses with chronons (particles of time) to turn a planet into a sentient entity capable of transcending and manipulating time. Essentially she wanted to create a deity of sorts. She was aiming to improve on evolution’s missteps, including giving the dinosaurs a chance on Earth, even though that would be to the detriment of humans. Ironically and potentially paradoxically, most of the minds she used to create her super-brain were human geniuses from Earth.

The Doctor’s new persona is prone to cite famous quotations incorrectly, and two of them have religious connections. “Blessed are the piemakers, for they shall make light pastry” and “A fool and his dogma are soon parted.”

There is more that could be said. I found the transformation of the strong character of Mel into the classic screaming terrified female to be disappointing, for instance. But Sylvester McCoy’s Doctor is immediately likable, even if it took him most of the episode to figure out whether he likes himself. And as the episode ends, Mel says that the new Doctor will take some getting used to, to which he responds, “I’ll grow on you.” New regenerations usually do.

Any fans of the Seventh Doctor out there? Is Sylvester McCoy the favorite of many – perhaps in particular those for whom he was their first Doctor?