Every Eye Shall See Him, Even Those Who Pierced Him

Look, he is coming with the clouds, and every eye will see him, even those who pierced him; and all the peoples of the earth will mourn because of him. So shall it be! Amen.

The implications of that verse for what the author of Revelation thought are noteworthy. One could perhaps suggest that the statement “every eye will see” Jesus could be a reference to the idea of a final judgment, at which all people will be present. But connected with the language of coming on clouds, and peoples mourning at his appearance (as will be depicted later in the book), it seems at least slightly more likely that it refers to the actual appearance of Jesus in the sky, the “second coming.” The similar language to Matthew 24:30 also suggests this. It reads, “At that time the sign of the Son of Man will appear in the sky, and all the nations of the earth will mourn. They will see the Son of Man coming on the clouds of the sky, with power and great glory.” 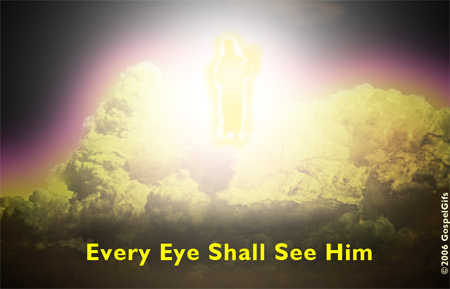 The fact that the author of Revelation says that even those who pierced Jesus will see him can be problematic, for those reading today, since it seems to envisage Jesus returning while those responsible for his death were still alive.

Moreover, for everyone to see him, a spherical Earth inhabited all around is also a problem.

Some in the first century may have still thought the Earth was flat, but the Greeks had shown it to be spherical. But even that progress left many (such as famously Augustine) skeptical of the Earth being inhabited anywhere other than on the upper part, since gravity was not yet understood. And so whatever the author’s view, an Earth of the nature and spread of human habitation that is now known to us seems clearly not to have been in view, or at least was not recognized as a problem.

I remember in my teenage years hearing someone say how they thought that this would be accomplished: the second coming would be caught live on television, allowing everyone to see. I now see how silly it is to read contemporary technology into Revelation. But however ridiculous that suggestion might seem, it was at least noting an important detail in the text that many seem to gloss over.

None of what I have mentioned above is surprising in the context of the earliest Christians’ expectation of an imminent end to human history as known up until that point. The Book of Revelation shares that expectation, as many of us who’ve long read and studied it have come to take for granted. But I still felt that it is worth pointing this out here on the blog, since there are so many who consider themselves faithful interpreters of the Book of Revelation, yet who gloss over such details and their meaning to the author and earliest readers of the book.

What do others think? Does this verse reflect a particular view of the shape and habitation of the Earth that is no longer our own? Does it envisage the second coming occurring within the lifetime of those who had crucified Jesus? Does it perhaps do so even more clearly than other sayings that seem to have the same meaning, such as Mark 9:1, “And he said to them, ‘I tell you the truth, some who are standing here will not taste death before they see the kingdom of God come with power'”?