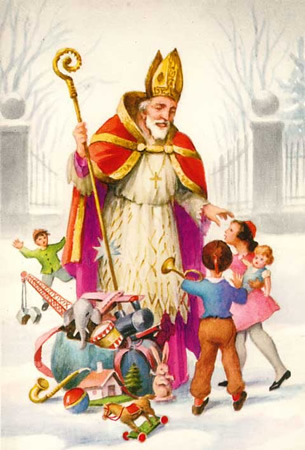 Jesus mythicism is akin to someone saying that because there is no Santa Claus, it makes the most sense to say that there wasn’t a historical bishop Nicholas of Myra.

It seems as though some are afraid that if one concedes the existence of the historical figure, you are accommodating or leaving an open door for the myth.

But that simply isn’t true. In fact, historical study of the history behind legends and myths, when such exists, is a far more effective way of combating the mythology, should one be inclined to do so, than simply suggesting lamely and implausibly that someone simply invented the whole thing out of whole cloth and then tried to base it in history.

What the evidence indicates is what matters. While the evidence for specific details about the historical figure of Jesus are open to dispute, some details – in particular the crucifixion – are beyond all reasonable doubt.

When I suggested this analogy in a comment on a post at Why Evolution Is True, someone responded that in the case of Nicholas of Myra we have clear evidence, unlike in the case of Jesus.

Even a tiny amount of research indicates that the historical evidence for Nicholas is fairly minimal and from after his time. As it is for so many historical figures who are nonetheless more likely to have existed than to have simply been invented.

Time and again it comes back to this: why would an adherent of the later mythology try to turn its central figure into a historical human being who fails to live up to the emphases of the myths? It makes no sense. But that is what mythicists claim.