Several posts around the blogosphere have converged on a single point, and I have wanted for some time to share some links and chime in myself.

I think it first started for me with the convergence of two posts on the same day in my feed reader. The first was on the blog Brick by Brick, and bore the title “Credo: ‘He Was Raised on the Third Day.’” There, David Williams challenged the “Chicken Little” language of many Christians, who claim that “the Gospel is at stake” when it comes to a seemingly endless array of topics. David suggested that one should ask whether, if Christ was raised from the dead but evolution is true, that would shipwreck their faith. If not, then you should get your focus where it belongs, and if yes, then something is seriously askew, he suggests.

(Pete Enns soon chimed in to agree, as did Chaplain Mike. See also Roger Olson’s post highlighting that some allegedly make-or-break issues, such as Scriptural inerrancy, do not in actual fact unite people who adhere to them, itself suggesting from the opposite angle that such beliefs do not make-or-break Christian faith or identity. And see also the post “When is the Gospel at Stake?” on Jesus Creed, and “Breathe, Henny-penny!” on Egregious Twaddle, both on this topic).

But then I read another blog also in my feed that same day, and also with the title “Credo.” In this post, Chey Raymo focuses on scientific knowledge, and why, even though it is not all-encompassing, it provides the most reliable conclusions possible to us in the areas that are within its purview. And in the process, he wrote,

All claims of the miraculous are dubious, if not fraudulent. Science has yet to encounter any phenomenon that manifestly violates natural law, and many former claims of the miraculous — such as the appearance of comets or visitations of disease — have been shown to be natural events. It is a common human attribute to mistake coincidence for causality.

Two posts called “Credo” but pointing in such different directions.

Or do they? If one regards both religion and science as either involved in seeking the truth or otherwise better discarded, then perhaps the answer is to press the line of questioning in David’s post further. It is, in a sense, a permutation of the wonderfully helpful question an atheist suggested I explore (and which I previously blogged about): “What would it take to make you lose your faith?” Presumably nothing that would not do so is truly essential to your faith.

So let’s ask some further questions. If Jesus was not raised bodily, but was spiritually raised by God to his right hand and so vindicated in otherwise just the way Christians have traditionally claimed, would you consider the Christian faith to be worth abandoning?

What if we cannot know in the present what happened to Jesus, but we have reason to believe that the God whose kingdom Jesus proclaimed exists, even if just as ineffable for us as for Jesus himself? If there is a reality that corresponds to what Jesus referred to and addressed as אלהי and as אבא, does it spell the end of your faith if that reality remains beyond our comprehension, or is that very unfathomability of God part and parcel of the essence of your faith?

According to the historical Jesus, the focus should be the kingdom of God. Paul concurs in 1 Corinthians 15:28, where he depicts the ultimate subjection of the Son to the Father, so that God may be all in all.

Perhaps in the end all that is essential is God – that which, or the one who, alone ultimately exists and ultimately matters?

If so, then there can be no real doubt that something and someone exists. The question remains of how far reality goes, what the ultimate reality is. We might ask whether it would matter if the Creator the universe, the one viewed by Christians as the supreme God and the Father of the Lord Jesus Christ, was himself the offspring of an even higher deity. Would it matter, and if so to whom, and why? Would it matter if the above was true, but our universe is closed off like a bubble from all other universes and so, in our universe, there truly are no other deities, and never will be any contact with any other universe in which things are different?

The questions we could ask are endless. But if what ultimately matters is Reality, and what matters is Ultimate Reality, then we can rest assured that there is such a Reality, and stop panicking over the possibility that we might be wrong or self-righteously assuming that we are right and know it all, and focus instead on calmly exploring the Reality within which “we live, and move, and exist” (quoted in Acts 17:28, but originally from Epimenides).

Perhaps faith is supposed to be about realizing precisely that we are not ultimate – we may be part of that Reality that is all-encompassing, but Reality is greater than my life, my beliefs, my dogmas, my credos. (On this topic, see David Opderbeck’s poem “Theologian’s Lament.”)

If we accept that, then the sky can fall, or not, but it will not panic us, because something greater than ourselves will persist.

Just to be clear, I mean this not in the sense of not caring what happens to ourselves or others, or simply treating what we or others believe with indifference. My point is about not panicking, not about not caring. What we believe, what we do, and whether we survive is not unimportant. It is just that it is, when it comes down to it, not what is ultimately important. Indeed, it is often when we elevate the survival of ourselves or our cherished institutions to a place of ultimate concern that these can then be held hostage to manipulate us for evil ends.

It might seem like I am heading towards letting Paul Tillich have the last word. But another’s words seem even more appropriate:

I think that puts the all-too-frequent claims about what is at stake in perspective. 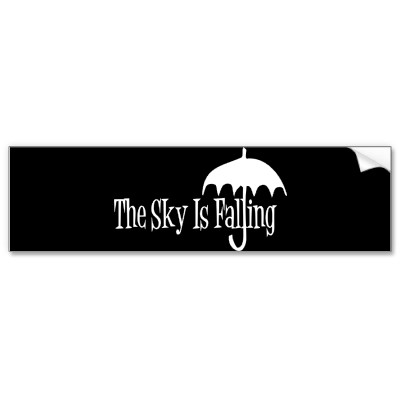