Although the secrets of the Doctor – his origins, his name, etc. – were in a sense part of the show’s fabric from the very beginning, the episode “Silver Nemesis

” from the Sylvester McCoy era marks something of a turning point, as an episode in which these become a central focus perhaps more so than ever before. The Doctor is not simply mysterious and reticent – he does in fact have secrets. And this episode aired, rather appropriately, 25 years to the day from when “An Unearthy Child

” aired and the Doctor Who phenomenon began.

There are spoilers in what follows.

The episode focuses on a statue which the Doctor had sent into space, and supposedly he had botched the trajectory and it was now returning to Earth as a result of an error. In fact, we learn that the status is made of living metal, and was created by Rassilon and Omega, as a powerful Gallifreyan weapon. Eventually we learn that the statue, now known as Nemesis, is in fact controlled by the Doctor – it actually longs for its freedom, but the Doctor refuses to grant it, even though he says he hopes not to need her again, because “things are still imperfect.” Nemesis destroys the Cybermen’s fleet, as the Doctor had planned all along. And so this episode shares a significant amount of continuity with “Remembrance of the Daleks

By the end of the episode, Lady Painford who had come into possession of Nemesis says that she has learned the Doctor’s secrets from it, and threatens to reveal them. “Doctor Who?” – the statue had told her, and told her about the “time of chaos” on Gallifrey. The Doctor seems as though he will let himself be blackmailed when she threatens to reveal the secrets – but as he foresaw, her potential audience, the Cybermen, do not care about a time lord’s secrets.

The episode ends with Ace asking the Doctor “Who are you?”

Although it might seem as though nothing is in fact revealed in the episode (as has seemed to be characteristic of most of the show’s history), perhaps there are some clues, not about things that the show’s creators had in mind all along, but of things that they decided to add to the show’s mythology by this point, if not earlier. The Doctor’s control of the statue, and his possession of the living metal and of the Hand of Omega, even while he said that it had been Rassilon and Omega that were responsible for these objects, suggests that the Doctor might have been around in the early days of the time lords. Indeed, I’ve sometimes wondered whether, in addition to being now the last of the time lords, it will not turn out that he is also the first – the Alpha and the Omega, one might say, even if he is not the Omega.

In “Doctor Who and The Silurians

” the Doctor in fact said “You know, I’m beginning to lose confidence for the first time in my life — and that covers several thousand years.” And in this episode, the reference to things still being imperfect sounds like it envisages the Doctor already having his “God complex” and being about perfecting the universe.

It must also be mentioned that the episode “Silver Nemesis

” was the first time the Doctor wore a fez and carried a mop: 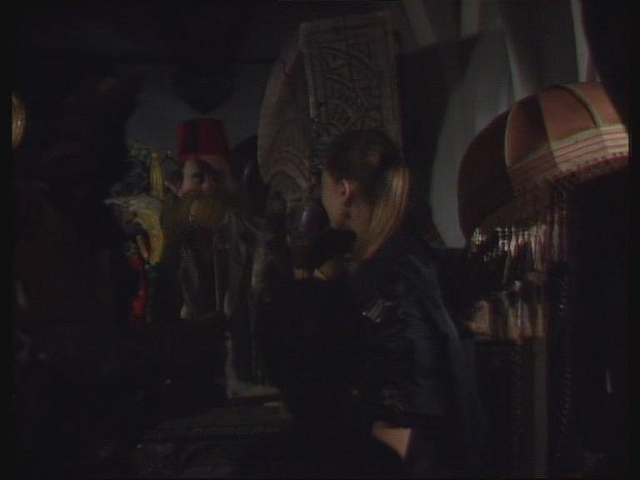 The focus of the latest seasons on the Doctor’s identity is very much in keeping with the tone set in this episode – and that seems intentional.

We also learn that the Doctor likes jazz.

The episode includes some interesting religious elements in addition to those implicit and around the margins of what has already been mentioned. Lady Painford apparently managed to travel from her own time to 1988 by using “black magic.” Much like in “The Daemons,” the episode’s view of magic is ambivalent.

There is also interesting symbolism in Lady Painford’s tomb, where there is an inscription that says “Death is but a Door.” And we see her companion Richard praying and seeking to bargain with God.

If you are a fan of recent Doctor Who, with its focus on the time lord’s secrets and identity, then this is an older episode you will definitely want to watch if you haven’t already.

June 22, 2012
The Real Solution to the Synoptic Problem?
Next Post

June 23, 2012 Is Jesus Satan?
Recent Comments
0 | Leave a Comment
Browse Our Archives
get the latest from
Religion Prof: The Blog of James F. McGrath
Sign up for our newsletter
POPULAR AT PATHEOS Progressive Christian
1