Don’t Let the Fact That Paul’s Letters are Now Christian Scripture Undermine Their Message and Authority!

Paul, in his time, made a case for relaxing Scriptural stipulations about the need for anyone within Abraham's household to be circumcised in order to be part of the covenant (Genesis 17:9-14). He did the same with regard to the people of God being called to observe the things written in the Law of Moses, i.e. Scripture as it existed in his time. When he did so, he himself could not simply declare his own writings Scripture so that it was Scripture against Scripture. He made his case, as well as he could. Later, the largely Gentile church which benefitted from his case elevated his writings to the status of Scripture as a result. 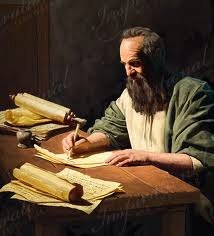 It would therefore completely miss, even undermine, the point of Paul's letters to now say, as Paul's opponents did in his time, “You can't include THOSE people in the people of God – that's contrary to Scripture!” For the whole thrust of Paul's writings has as its central pillar the conviction that God can enlarge his people and be still more inclusive than he had been in the past, even if it means setting aside commands that he had previously given to his people.

When conservative Christians use the current Scriptural status of Paul's letters to undermine or distract from what those letters were in the first place, when they were written, they are in using their canonical status not to elevate the authority of Paul's writings, but to avoid their radical implications, and the transformations they might lead us to make as a church in our own time, were we to understand what they are about and take them seriously.

I have written before about this, calling this the “Do as I say, not as I do” approach to Scripture. It is a popular approach among conservative Protestants, who are willing (at least in principle) to do what Scripture says (although in practice they manage even so to dilute or ignore its radical teachings about things like wealth and possessions, for instance). But to ignore that these texts became Scripture because they made a persuasive case, and did not when they were first written persuade because they already had scriptural status, risks missing the point of those writings. It allows people to take for granted the inclusion of those who are already in in their time, and draw fast and rigid boundaries excluding others, even though the whole essence of some of those writings was to accomplish precisely the opposite.

So don't let the fact that Paul's letters are now Christian Scripture lead you to miss their powerful, radical, inclusive, and at that time arguably “unbiblical” teaching. Otherwise, you are liable to line yourself up alongside the opponents of Paul against those who are making a case akin to the one Paul made nearly two thousand years ago, those of us who allow the most fundamental Christian principles to challenge us to accept those whom God accepts, even if it means setting aside some texts that were previously used to define a narrower and more restrictive community in the past.

July 18, 2012 Conservatives, Liberals, and the 50 Shades of Grey Between Them
Recent Comments
10 Comments | Leave a Comment
"Under the old covenant (ten commandments), people were (and still are) racists and sexists. For ..."
Herrnhut Was Jesus a Racist?
"Reconciliation is a two-way street, restoring a broken relationship between two people. God does indeed ..."
Iain Lovejoy Forgive Us Our Debts, Not Repay ..."
"Excellent. God is not, and does not want to be, an accountant; keeping a ledger ..."
Harvey James Johnson Forgive Us Our Debts, Not Repay ..."
"Don't confuse forgiveness with reconciliation. Jesus tells us to forgive people who sin against us, ..."
Derek Thompson Forgive Us Our Debts, Not Repay ..."
Browse Our Archives
get the latest updates from
Religion Prof: The Blog of James F. McGrath
and the Patheos
Progressive Christian
Channel
POPULAR AT PATHEOS Progressive Christian
1