Someone turned the point I made in my last blog post into an image. I will have to check the figures, but it looks about right. Thoughts? 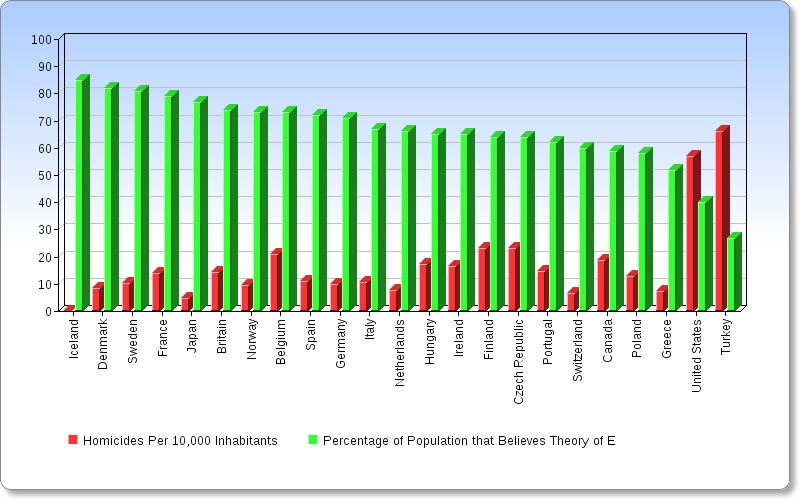 My first instinct is to doubt that there is a connection, that the correlation indicates causation. But it does not seem impossible to me that the entire culture of “culture wars” in which people learn to distrust their fellow human beings, suspecting that they are undermining the fabric of society and all that is good and true (by being evolutionists/Republicans/atheists/gays/Christians/Communists/Chick-fil-A customers/whatever else), fosters dehumanization of others to an extent that does indeed have an impact.

Or maybe it is the fact that some people are taught at home (or at church, by Rick Warren for instance) that if evolution is true, then we have no reason to be moral. When those people discover that they we lied to and evolution is indeed true, are they not likely to assume that the second part also applies, and that there is no reason to be moral? It becomes a tragic self-fulfilling prophecy

But then again, the correlation may just be a coincidence. What do others think?

July 22, 2012 Rick Warren Responds
Recent Comments
17 Comments | Leave a Comment
"Definitely seems to require more study. Thank you for sharing that!"
James F. McGrath Is Abortion Murder? (Giving Birth Again ..."
"Politifact doesn't agree with your Democrat posit:"Overall, the CDC says that the known number of ..."
Bob Shiloh Is Abortion Murder? (Giving Birth Again ..."
"OOPS, forgot the URL. Silly me. https://smile.amazon.com/Je..."
gloriamarie What Jesus Learned from Women Press ..."
"I loved the title of this book from the first moment I saw it. As ..."
gloriamarie What Jesus Learned from Women Press ..."
Browse Our Archives
get the latest from
Religion Prof: The Blog of James F. McGrath
Sign up for our newsletter
POPULAR AT PATHEOS Progressive Christian
1