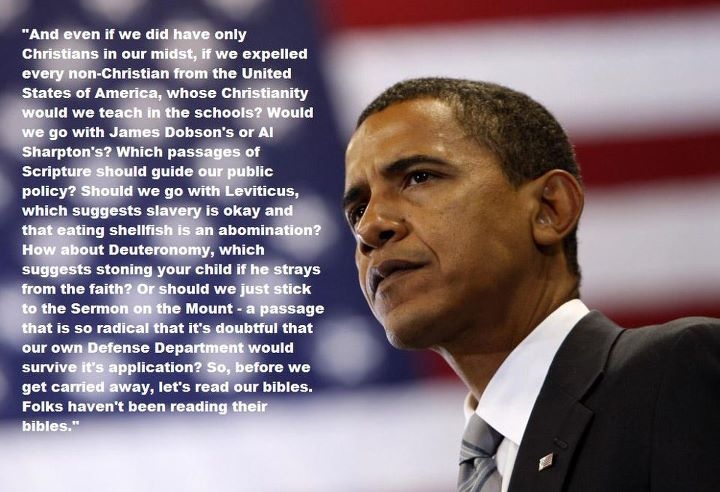 Someone made the above quote from then senator Barack Obama into a poster. It illustrates what those who are intimately acquainted with the Bible and its interpretation see clearly, but religious fundamentalists less familiar with their own Scriptures often miss, namely that it is not at all straightforward to derive a clear set of beliefs and practices from the diverse and divergent writings that make up the Bible. As a result, even when people agree on what Scripture is, and even if they agree that it is inerrant, does not at all lead to them believing, doing and advocating the same things.

The reason I am a Liberal Christian is precisely because I think the only Christianity worthy of the name is one that knows what is in the Bible, and is honest about the fact that we do not believe and practice everything it says, that we do not want to do so, and that there are good reasons why we should not do so.

July 24, 2012 American Christianity's Blind Spot
Recent Comments
27 Comments | Leave a Comment
Browse Our Archives
get the latest from
Religion Prof: The Blog of James F. McGrath
Sign up for our newsletter
POPULAR AT PATHEOS Progressive Christian
1