Is there or ‘aint there mistakes the Bible?

Some people think that they must defend the Bible's various words, statements, and depictions as being compatible with what we today know, whether scientifically, historically, or in other terms, lest its entire message be put in doubt. But it just cannot be done, at least not without a far greater cost, and undermining the very goal of attempting to do so in the first place. If you have to twist the meaning of Scripture in order to claim that it is accurate, you are not in fact defending Scripture. And so it is better to be honest, and accept that what these authors had to say about God, they expressed in terms of their understanding of the world, their own limited human perspective, just as we do. 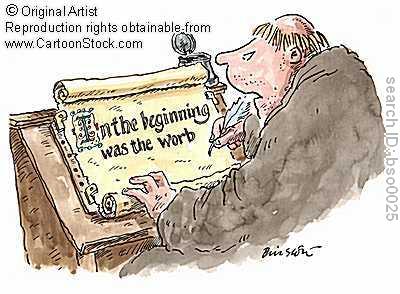 But here is the central point of this post: I do not understand why this is such a sticking point for some people. If God did not force correct grammar on these authors – something that some people are capable of even without a miraculous intervention – then why would anyone insist that he imposed correct science on them? Why would we think that God was concerned that the content of Paul's sentences had to be inerrant, when God apparently was not even concerned to make sure that Paul finished his sentences?

As Scott Lencke perhaps hinted in a recent post on his blog, what the would-be defenders of the Bible is something far worse than what they are trying to deny that the Biblical authors did. The Biblical authors reflect a pre-scientific view of things because they did not have available to them the information or modes of studying the world that we have. The modern-day young-earth creationists and other inerrantists, on the other hand, are being dishonest in relation to data, evidence and methods that are freely accessible to them. They either deliberately misrepresent things, or gullibly accept the claims of those who do so, without fact-checking their claims – which is no better.

And so they are trying to deny the fallibility of the Bible's human authors, and in the process, they themselves are actively and blatantly sinning.

The truth is that no one ought to consider young-earth creationism or inerrancy Christian viewpoints at all. (Indeed, it is only the ridiculously large number of adherents to these views that allows them to be mistaken for such, rather than relegated to the stubborn lunatic fringe with the flat earth society.) Even though their proponents set themselves up as Christianity's spokespeople and defenders, their views are blatantly and wilfully sinful, and thus inherently at odds with the most basic core of what Christianity is all about.

There is a quote attributed (rightly or wrongly) to Albert Einstein which I really like: “Make everything as simple as possible, but not simpler.” Christians concerned about the authority of the Bible should perhaps take to heart this modified version: “Make your view of Scripture as high as possible, but not higher.” Any view of the Bible, however much it sings the Bible's praises, if it does not actually fit what the Bible is, then it is a distortion of Scripture, and in no sense a defense or appropriate glorification of it.

It doesn't matter how glowing your words about the Bible are. If they pretend the Bible is something it shows itself to not be, then your words are lies, honoring neither the Bible nor God. And so, once again, any view fitting this description is not merely failing to articulate an appropriate Christian view of Scripture, but because of the dishonesty and distortion involved, should be judged to not in any meaningful sense be a Christian view of the Bible at all, however much it may use Christian-sounding language or say very nice (if at the same time very dishonest) things about the Bible.

July 16, 2012
"Ross Douthat is a Fruit Fly" and Other Responses Around the Blogosphere
Next Post