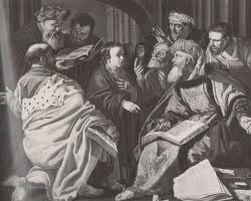 A Facebook conversation (if one can call it that) in which I recently became embroiled reminds me of how I used to approach discussions with those who disagreed with me. It was OK to lump my opponents with the worst behavior among those who agreed with them, but any attempt to reverse that logic was dismissed. And it was no problem to deny that I had earlier said certain things, if it later became clear that they were problematic or indefensible.

I was arguing for Jesus, and so of course winning mattered, right?

Now, however, I think that Jesus would care more about how those who claim to be his followers behave in their discussions with others, than about whether or not they seem to win the argument.

Why are so many Christians today happy to have the mere appearance of victory, especially when engaging in immoral or immature debating tactics means that you have been defeated in your attempt to follow Jesus, something which ought to matter more than being defeated in an argument. It should matter more even than being right, never mind merely appearing to be right.

August 5, 2012 Curiosity
Recent Comments
10 Comments | Leave a Comment
"These fake dinosaurs are a lot more authentic to the real ones than the Creation ..."
Jennifer A. Nolan Prehistoric Planet
"I'm happy to say my Secular Frontier blog post of my interview with Edouard looks ..."
John MacDonald The Odious Penal Substitutionary Theory of ..."
"The name of the song was mentioned in the episode here is the full version ..."
dschram Entering Strange New Worlds of Star ..."
"Thank you for sharing this. Where did you learn that about the Kenyan folk song? ..."
James F. McGrath Entering Strange New Worlds of Star ..."
Browse Our Archives
Related posts from Religion Prof: The Blog of James F. McGrath