It seems that I am not alone in drawing the conclusion that young-earth creationism is better labeled “demonic” than “Christian.” Blogger Rebecca Trotter left a comment on my blog, indicating that an encounter with the Institute for Creation Research led her to draw that conclusion. In the blog post describing what happened, she also shared this nice little image (originally found at Thinking Sci-Fi): 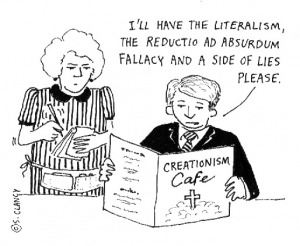 I know that some people consider this sort of rhetoric too harsh. But let’s be honest. If Christians are to use the term demonic at all, then would not a movement that (1) lies about science, (2) lies about the Bible, (3) sows division among Christians, (4) demeans those Christians who actually do serious scholarly work in science or Biblical studies, (5) gets Christians to waste incredible amounts of money combating mainstream science when there are so many genuine needs, and, perhaps worst of all, (6) persuades Christians that they are doing God’s work by arrogantly and misguidedly fighting science, instead of learning  humility, charity, compassion, and appreciation of the Bible for what it is and of science for what it can help us understand – if organizations that do all of that do not deserve the label “demonic” then presumably nothing does. I would have no objection to discarding such terminology. But until we give up using such labels, at least let’s use them aptly.

August 13, 2012
In which Jim West and I do the horizontal biblioblog thing
Next Post

August 13, 2012 Competing Denialisms
Recent Comments
26 Comments | Leave a Comment
Browse Our Archives
get the latest from
Religion Prof: The Blog of James F. McGrath
Sign up for our newsletter
POPULAR AT PATHEOS Progressive Christian
1

Learning to Be
(This is the introduction to my book:  Being: A Journey Toward Presence...
view all Progressive Christian blogs
What Are Your Thoughts?leave a comment
Copyright 2008-2021, Patheos. All rights reserved.
error: Content is protected !!