On Facebook I shared this quote from Richard Dawkins, which came to me in poster form via George Takei: 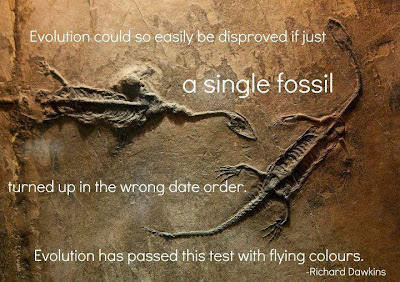 Biologist Larry Moran chimed in both on Facebook and on his blog to point out that the statement is, at the very least, not entirely correct, and the extent to which it is true depends on what one is referring to by the word “evolution.” If, to use a classic example, a fossil of a rabbit was discovered in the Precambrian era, then that might require a major rewriting of the history of life on this planet. But it is not the case that, if we found that certain organisms had appeared earlier or later than we first thought – something that happens all the time as new fossils are found, evidence is re-examined, or dating methods are improved – this would disprove evolution.

But the quote from Richard Dawkins is correct in indicating that the evidence all consistently points in one direction. And so what could disprove evolution as currently understood? If the massive converging evidence pointing to a development of life on this planet from simple forms to more complex ones were to be shown to be problematic – say by suddenly finding clear evidence that mammals existed at the time from which our oldest fossils of simple life forms stem – then we would either have to reject evolution, or  accept that there had been a prior evolutionary history that was subsequently wiped out, with the process beginning anew, or perhaps that our planet had been visited by being from another world whose remains we had discovered. It is not just finding a fossil slightly earlier or later than we expect to that would make a difference.

This is what happens with theories. As more and more evidence is found to support them, the likelihood that any future evidence will require a radical discarding of the theory – as opposed to minor adjustments to the details – becomes unlikely. Many critics of science point to the history of our changing knowledge in ways that are completely off base. It is true that once humans assumed that the Earth was flat, and then that it was round but at the center of the cosmos, both being overthrown in turn in light of more detailed examination. But each time we have improved our understanding and moved closer to the truth. That future more precise measurements would ever cause us to simply reject that the Earth is roughly spherical is for all intents and purposes impossible.

Evolution has a comparable standing. The evidence from fossils, from genetics, from observation of and experiments with living organisms, all supports the theory of evolution – which, to say it yet again, does not mean “the guess of evolution” but “evolution the explanatory framework supported by and in turn making sense of a large array of data.”

As I near the end of this post, let me offer Larry Moran’s own statement in response to the quote from Richard Dawkins, proffered on both Facebook and his blog:

The statement is untrue. If we discover that a given species is older than we thought then we will just revise our view of the history of life on Earth. It will not disprove the fact of evolution and it will have no effect on evolutionary theory. It is a mistake to link the truth of evolution to our current understanding of the history of life. That history can be easily changed without threatening evolution.

And let me also share, with hat tip to Larry, a link to a more detailed discussion of the topic by T. Ryan Gregory, which clarifies the distinction between three different things which are sometimes all referred to as “evolution”: the fact that evolution occurs, the detailed theory about precisely how it occurs and why, and the path which the process of evolution is thought to have followed. Changes to the latter two do no invalidate the former, which is a matter of simple observation and rational deduction from an enormous amount of converging evidence.

August 17, 2012
John Byron on the Centurion's Slave and Homosexuality in the New Testament
Next Post

August 17, 2012 Marvin Meyer R.I.P.
Recent Comments
10 Comments | Leave a Comment
"Under the old covenant (ten commandments), people were (and still are) racists and sexists. For ..."
Herrnhut Was Jesus a Racist?
"Reconciliation is a two-way street, restoring a broken relationship between two people. God does indeed ..."
Iain Lovejoy Forgive Us Our Debts, Not Repay ..."
"Excellent. God is not, and does not want to be, an accountant; keeping a ledger ..."
Harvey James Johnson Forgive Us Our Debts, Not Repay ..."
"Don't confuse forgiveness with reconciliation. Jesus tells us to forgive people who sin against us, ..."
Derek Thompson Forgive Us Our Debts, Not Repay ..."
Browse Our Archives
get the latest updates from
Religion Prof: The Blog of James F. McGrath
and the Patheos
Progressive Christian
Channel
POPULAR AT PATHEOS Progressive Christian
1