In a conversation with a young-earth creationist here on this blog, I was struck by the irony of the fact that he offered, as one reason for rejecting evolution, the teaching of Scripture that we should not follow the ways or teachings of sinful human beings.

How right he is, and how wrong at the same time! 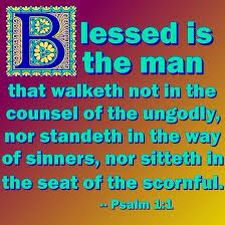 Scripture nowhere says that the people of God should have different names for colors, or natural phenomena, merely because unbelieving society names them a certain way. In matters of observation, and even those of inference like the heart being the place where emotions are located, or one or more domes or spheres being over or around the Earth, the Bible's authors nowhere – I repeat, nowhere – say that flowers or colors or celestial bodies or anything else that humans can observe and study, or infer on the basis of such observation and study, should be thought of or named differently than they are by other human beings. When the author of Genesis 1 said that God created simply by command, and not by slaying a sea-dragon, he nonetheless retained the idea that there were waters above and below. When their contemporaries were wrong, so too typically were the authors of Scripture. And they are never criticized for it. So presumably it is not with respect to the observation of the natural world that God's people are instructed not to follow what other human beings do.

As various texts make clear, the community of faith is being called to be different morally. And this makes the misuse of this emphasis in Scripture by young-earth creationists truly shameful. Because all one has to do is witness just a glimpse of their arrogance, their rejection of the sound insights and advice from Christian brothers and sisters who actually have expertise in the natural sciences or Biblical studies, and much else that characterizes the behavior of adherents of this movement (not all, to be sure, but in my experience most, including myself when I was a young-earth creationist), to realize this uncomfortable but obvious and undeniable truth:

Young-earth creationists are just like the world, in all sorts of important ways.

I think that young-earth creationism is, in fact, just one of a number of movements that people gravitate to precisely because it allows them to feel like they are rejecting the world, allowing them to avoid the painful introspection that is necessary if one really and truly wants to be morally different than the vast majority of people, in the ways that many parts of Scripture, including the teaching of Jesus, challenge us to be.

And so I appeal to young-earth creationists: Stop following the ways of sinful human beings, and stop comforting yourselves falsely with young-earth creationism's false teachings which lull you into a false sense of having rejected worldly thinking, when in fact you are failing to be transformed morally and spiritually at a more fundamental level. And follow instead the hard path of repentance and self-examination which is the true calling of Christians.

August 18, 2012
Young-Earth Creationists Substitute Words of Men in Place of the Word of God
Next Post

August 20, 2012 Quotes on Inerrancy
Recent Comments
55 Comments | Leave a Comment
"Li Hsen Chang only speakee in pidgin around people who expect him to. At all ..."
John Knowles Doctor Who: The Talons of Weng ..."
"What does the link to your blog have to do with this blog post?"
James F. McGrath The Most Extraordinary and Implausible Inventions ..."
"Probably the foundational truths that need to be taught is rightly dividing the Word of ..."
David Tiffany The Most Extraordinary and Implausible Inventions ..."
"Derp now anyone who advocates a 2 state solution is a Zionist like Chomsky.Meanwhile Israel ..."
Bones Academics and the Israel-Palestine Conflict
Browse Our Archives
get the latest from
Religion Prof: The Blog of James F. McGrath
Sign up for our newsletter
POPULAR AT PATHEOS Progressive Christian
1