So You Wanna Talk About Free Speech?

A lot of people have brought up “freedom of speech” and related phrases in discussion of the current expressions of support for and protest against Chick-fil-A and its CEO Dan Cathy. But freedom of speech is only the issue at one very specific point in the controversy.

No one should be denying the free speech of either Dan Cathy to say what he thinks about homosexuality or what he mistakenly considers to be the “Biblical definition of marriage.” Nor should anyone be denying the free speech of those who disagree with him. And apart from the move – obviously of questionable legality – by a couple of politicians to try to resist the expansion of the food chain into their areas, the very vocal outpouring of opinion on both sides shows that freedom of speech is alive and well.

If some people go to eat at Chick-fil-A to express their support for the chain or its CEO – or simply because they are hungry and think that a boycott is misguided – and if others refrain from eating there, both are free to do so. The United States Constitution does not have, nor does it need, an additional free exercise or establishment clause, stating “Congress shall make no law respecting an establishment of chicken, or prohibiting the free exercise thereof.”

The issue of free speech only comes up in one specific area, namely Dan Cathy’s support for at least one organization (to which his donation was relatively small compared to others) that advocates the recriminalization of homosexual acts and brands all homosexuals as pedophiles. The organization in question is known as the Family Research Council.

I am not sure whether any of the other organizations have taken stances for similar things. And just to be clear, in not focusing on the topic in this blog post, I am not saying that the stances that those organizations do adopt, such as opposing the rights of gays and lesbians to marry, are not problematic. I am focusing here on the one organization which I can say with confidence represents a clear threat to freedom of speech. Because gays and lesbians would not be able to be active, vocal participants in the current discussions if they were all considered criminals.

It is at this point that I wish to mention Sally Ride.

The death of this pioneering astronaut brought the revelation to the public that Ride was a lesbian. And it is appropriate to ask why someone who had the courage to be catapulted by tons of volatile rocket fuel into outer space would keep this aspect of her life relatively secret.

To answer that question, one cannot but mention that Sally Ride grew up in an era the younger generation among us today scarcely remembers, if at all. A time when being a female astronaut was controversial enough. A time when being homosexual could lead to not merely harassment but legal prosecution. Even today, there is bullying and much else that should cause everyone in our society dismay.

If you cannot understand that a courageous individual who has been described as a hero could find herself nervous when it came to the prospect of society knowing that she loved a woman as her life partner, then you are probably a heterosexual who has never really spoken to someone who is gay or lesbian, and who simply does not know and cannot imagine what people still go through, and what still haunts those who grew up at a time when their actions were not merely frowned upon but a felony.

That is where I see freedom of speech as an issue in the whole Chick-fil-A hullabaloo, and nowhere else. Supporting the treatment of gays and lesbians as criminals is not compatible with being a free country with protection of freedom of speech, any more than slavery or segregation were. When you are legally viewed as a second-class citizen, you will always find it hard to have the same liberties of speech and in other respects as those upon whom the law looks more favorably. That it took our society a very long time to realize this doesn’t make the arguments in favor of what is “traditional” any more convincing or any less problematic.

And so, in support of freedom of speech, and to encourage discussion of the issue, let me share an image which came to my attention via a Facebook friend. 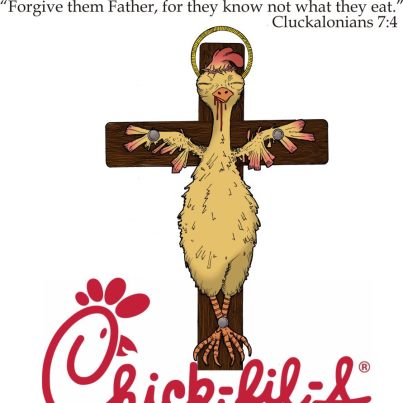 In closing, let me encourage those who feel inclined to participate in the Chick-fil-A controversies to try to steer the conversations back to where they need to be. The really crucial issue is not what Dan Cathy thinks, but the move by an organization he supports to move the entire nation backwards, towards the revoking rather than the granting of basic civil and human rights to everyone, whether gay or straight, going far beyond freedom of speech to the freedom to love and to express that love without fear of persecution of prosecution.

It would be a terrible thing if that crucial issue gets lost from sight, obscured from view by discussions about the buying and selling of chicken.