I’ve decided that the best way to review and illustrate the capabilities of the BibleWorks 9 software is to blog my way through using it for various purposes, taking screenshots along the way. Today I will blog about one example, an investigation of the lexical meaning and history of interpretation of a particular term.

I decided for this example to look into the word תַּֽדְשֵׁ֤א found in Gen 1:11. The Hebrew text in this blog post, by the way, is copied and pasted from BibleWorks, which is worth knowing, since it illustrates that one can do so and what the result is. It needs to be mentioned that the reverse does not work – the search box will not understand pasted Greek, Hebrew or other non-Latin scripts, which is understandable given the different ways the fonts for those languages are mapped to keyboards. But the ability to copy and paste into BibleWorks is perhaps something to look forward to in future versions, as Unicode comes to predominate. In the mean time, one cannot even copy and paste within BibleWorks itself, but this does not create problems, since one can simply select a word and search by right clicking.

So back to my question, related to Genesis 1:11. What I was wondering was whether the text implies that it is the Earth that is being commanded to bring forth living things, which would suggest that the author believed that the Earth had the creative capacity to comply, which might then reflect a view akin to the ancient belief in spontaneous generation.

The Hebrew Hiphil form implies a command, but does this merely reflect the divine command (“let the earth sprout”) or a command to the Earth to do so, “let the earth cause to sprout”? There are English translations that render the text both ways, and I was able to compare some of them in BibleWorks.

The Greek translation was also one of the default translations visible without changing any settings, and so I could see that the LXX renders the word with βλαστησάτω, a 3rd person imperative, which might suggest that the Earth is being given a command. But since there are 3rd person imperative forms throughout the chapter in the form of γενηθήτω, “let there be,” the matter becomes less clear – although the fact that that is passive while βλαστησάτω is active may be significant.

I turned next to the Targums, to see how Aramaic paraphrases of the text rendered the idea. These too are included in BibleWorks 9. Targum Neofiti has  תפק and that haphel can mean both “to bring forth” and “to cause to bring forth.” Some other Targums used different words but with similar meaning – and similar ambiguity.

As I searched, I was glad that just before there had been a pop-up tip, explaining that one can stop the far right window, which displays lexical and grammatical information, from changing, by holding down the shift key when moving the mouse. Without that information, I might have struggled for a long time to avoid touching any other words as I sought to get my mouse from a word in the midst of other text to a point where I could reach the scroll bar on the far right. In using the program, I definitely have the impression that pop-up tips are neither too few nor too many, nor random and irrelevant. The program seems to have been designed to know what suggestions will be relevant and when, and to offer them accordingly. And so even if in other programs the pop-up tips can be a frustrating nuisance, to be switched off at the first opportunity, I recommend not doing so with BibleWorks 9. They are helpful, and once you have become accustomed to the program, you can turn off tips at a later time.

Returning to my investigation, the research I did up to this point suggested that the answer to my question would not be found through lexical data alone. The question was not what the words could potentially convey, but what authors and readers in that time would most probably have understood.

If I wanted to continue, I could in a couple of clicks be at the works of Philo or the writings of the Apostolic Fathers in English, to see how they understood the text. There are quite a number of other modules not included with the program which that can be added. Some are produced by BibleWorks, others by third parties. They offer a variety of additions, including still more ancient sources, images of manuscripts, grammars, reference works and commentaries. Of these some are free, others need to be purchased. But since I am not sure how much subsequent ancient interpreters, were they to make reference to this verse, would provide a clear indication of the likely original meaning of the text, I did not press on. But the presence of such works within the software, and the ability to add still more, makes BibleWorks 9 a far more valuable tool to the scholar than it would be without them. 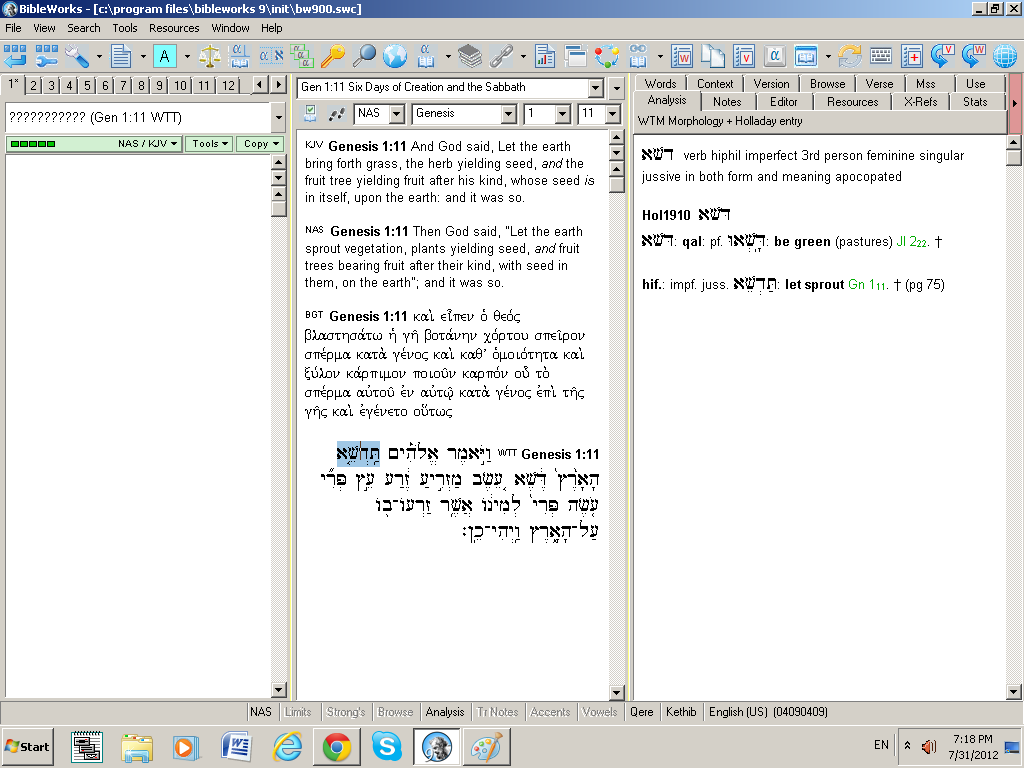 September 12, 2012 Now That's What I Call Worship!
Recent Comments
0 | Leave a Comment
"Oh I definitely agree that the Khrushchev Thaw basically created a more open battlefield and ..."
Chris H Mythicism, Monotheism, and Mandaeism
"Wow, I've consulted TARDIS Eruditorum before but hadn't read the entry on Logopolis. Amazing! I ..."
James F. McGrath Doctor Who: Logopolis
"Out of interest, have you read Elizabeth Sandifer's TARDIS Eruditorum? It's a series discussing Who ..."
Scurra Doctor Who: Logopolis
"very interesting i love games with deeper themes."
Brandon Roberts #CFP Video Games and Religion
Browse Our Archives
get the latest from
Religion Prof: The Blog of James F. McGrath
Sign up for our newsletter
POPULAR AT PATHEOS Progressive Christian
1