Eruesso shared this tattoo of Spock depicted in imagery typically associated with Jesus: 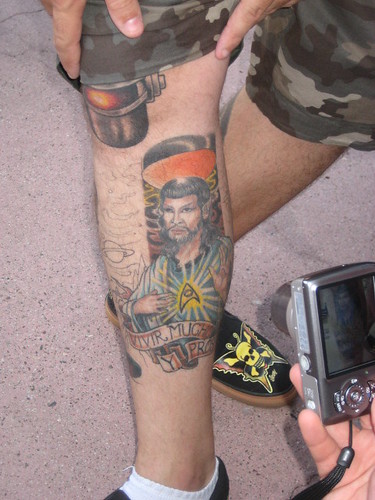 He said he’ll leave it to me to decipher it (presumably not the text, which is “Live Long and Prosper” in Spanish, but the significance of the whole thing). If he expects me to explain why someone would etch this permanently onto their leg, then I can’t help. But there is certainly much that one could say about the role of Spock in relation to religion and Star Trek fandom. Spock is at once the most logical and the most consistently and explicitly religious figure on board the original Enterprise. He practices a Vulcan way of life which includes things that look like meditation and ritual, and is shown doing so even more frequently than Uhura works in references to Christianity.

There are quite a few other interesting images that bring Jesus and Spock together online. Here are just a couple of examples: 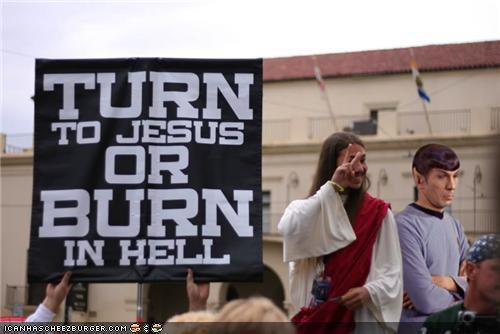 There is also a bizarre video in which Jesus and Spock have a conversation on the bridge of the Enterprise, in which Jesus turns out to have learned everything that he knows about the history of Christianity from reading The Da Vinci Code…except, apparently, what he learned from the Jesus mythicists:

If you have read this far, you must have a profound interest in religion and Star Trek. In that case, click through to read a comic I made featuring a conversation between Jesus and a redshirt, if you haven’t already seen it.

September 14, 2012
A Different Trinity: The Father, Son, and Holy Candidate
Next Post