Where do mythicism, young-earth creationism, mainstream biology and mainstream historical study (including but not limited to the study of the historical Jesus) fit in the diagram below, in the view of readers of this blog? Even though one cannot run “history experiments,” are historians not doing something similar when they take their ideas about the past and test them against the available evidence? Just having an idea that is compatible with the evidence does not show it to be correct in the domain of history, because, given the piecemeal evidence historians often have to work with, it is entirely possible for more than one conclusion to be compatible with the evidence. But historians at least try to exclude as bunk things that are incompatible with the evidence, while it seems that apologists of every sort are on the right hand side of the image below, not on the left. What do readers think? 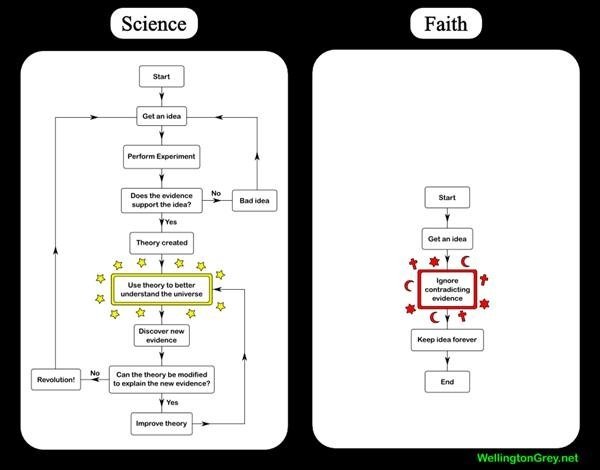 (The diagram is from Unreasonable Faith)

I’d also be interested to hear from anyone who, like me, thinks that there can be faith – in the Tillichian sense of Ultimate Concern – which embraces new information and correction, rather than insulating itself from it. In the view of readers, can there ever be a form of religion that would be placed on the left hand side?

September 13, 2012
What if you're Wrong? (Changing the Default Setting)
Next Post

September 14, 2012 Freedom of Speech = Freedom to Insult, to Criticize, and to Apologize
Recent Comments
40 Comments | Leave a Comment
Browse Our Archives
get the latest from
Religion Prof: The Blog of James F. McGrath
Sign up for our newsletter
POPULAR AT PATHEOS Progressive Christian
1