Possibly the Most Interesting Pact With the Devil

Rick Perry has apparently made some bizarrely critical comments about the separation of church and state. That separation is the separation that the forerunners of modern Evangelicals, including the Baptists in particular, struggled for and advocated. It is the one that is surely responsible for the fact that religion is a vibrant part of American life in a way that is not true in those countries where such a separation does not exist.

If Perry is calling for spiritual warfare that aims to undermine that separation, then I think one cannot but conclude that he is doing so in order to undermine the Christian faith, not promote it – whether he knows it or not. Because if anything has been to the detriment of Christianity in the past two millennia of its history, it is the forging of an allegiance between imperial/state power, and the church.

I don’t think there is a literal personal entity called “Satan.” But if I did, I’d expect him to be seeking to put the church in bed with the state, and not keep them apart in the manner that has upheld and defined religious freedom in the United States.

Progressive Christians don’t always use the term “demonic” – certainly not as much as some Christians do. But when we do, it is in reference to those who would take the name of the one who taught his followers to not repay evil for evil, and stick it on flags or the bumpers of tanks. 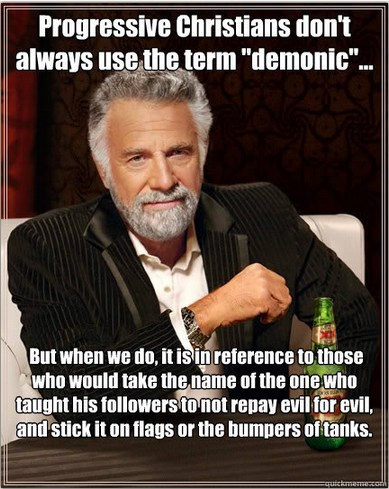 September 21, 2012 Hellbound?
Recent Comments
3 Comments | Leave a Comment
"They are done by non-religious or post-religious people in societies that have had a strong ..."
James F. McGrath Gamified Grading in a Pandemic Crisis
"All that could have been, and is, done by people not affiliated with any religion. ..."
Nixon is Lord Gamified Grading in a Pandemic Crisis
"You don’t seem to understand the core issues, and don’t seem to grasp the basics ..."
James F. McGrath Philippians 2 and the Historical Jesus
"Ok thanks for your opinion and thanks for.not answering the question, now I guess that ..."
Vladimir Romanov Philippians 2 and the Historical Jesus
Browse Our Archives
Follow Us!