Around the Blogosphere: The Varieties of Fundamentalisms

Around the Blogosphere: The Varieties of Fundamentalisms October 30, 2012 James F. McGrath

Here’s a round-up of some blogging on several topics of longstanding interest:

Michael Pahl is leaving Cedarville University due to his views, which are at odds with those of that fundamentalist institution. The university’s president has also resigned.

Doug Chaplin asks how any institution with the views Cedarville stipulates in its statement of faith can call itself a university. And the implications of the university’s statements need to be reflected on. They said,

Dr. Michael Pahl has been relieved of his teaching duties because he is unable to concur fully with each and every position of Cedarville University’s doctrinal statement…Dr. Pahl’s orthodoxy and commitment to the gospel are not in question, nor is his commitment to Scripture’s inspiration, authority and infallibility.

UPDATE: Tony LeDonne has weighed in on this topic since I first posted this, as have Mike Bird and Bruce Gerencser.

Before anyone gets on a high horse about this, let me now share a link to a guest post by Timothy Pettipiece on Alin Suciu’s blog, in which he draws attention to the dogmatic and dismissive attitude of some bloggers to the papyrus fragment known as the Gospel of Jesus’ Wife.

Michael Kruger linked to an article in World magazine about the fragment, while Bob Cornwall shared the piece in Sightings.

Timo Paananen has an article in Currents in Biblical Research about a similar problem to that noted in Pettipiece’s piece, but in relation to the Secret Gospel of Mark. The article is available for free for a limited time.

Returning to Christian fundamentalism, and the question of whether its approach to the Bible is typical among atheists as well, the blog Unreasonable Faith has posted a contribution to the conversation. I think the last bit about liberal Christians misses the mark. For many liberal Christians, the term God denotes that with which we are ultimately concerned, that which is most transcendent. And so it is not that we start with the assumption that God is loving. We begin with the conviction that love is in some sense ultimate, and central to our ultimate concern, and so that therefore becomes part of the core symbolism relating to the term “God.”

Before concluding, let me mention the fact that Mark Goodacre has shared a pdf by Richard Bauckham about the name Yose and its relevance to the Talpiot tomb.

And finally, to reward (or is it punish?) those who read all the way to the end, here’s the most amusingly outlandish “Jesus and his wife Mary” image I’ve come across on the internet lately: 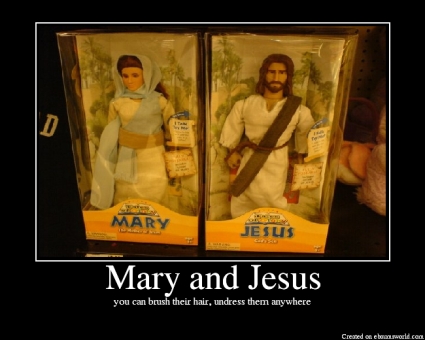 October 30, 2012 Conference Hashtag: #SBLAAR
Recent Comments
7 Comments | Leave a Comment
Browse Our Archives
get the latest from
Religion Prof: The Blog of James F. McGrath
Sign up for our newsletter
POPULAR AT PATHEOS Progressive Christian
1