Doctor Who: The Curse of Fenric

Doctor Who: The Curse of Fenric October 9, 2012 James F. McGrath

I was sure that I had already blogged about this episode, The Curse of Fenric

. But if I did, the post seems to have been lost. Does anyone remember reading a post by me about this episode? Or did I gather my thoughts but never share them?

The episode “The Curse of Fenric

” is considered one of the highlights of the final season of Doctor Who, and indeed of the entire Sylvester McCoy era. It is set during WWII, and envisages a “final battle between the gods and the beasts” the time for which has arrived. 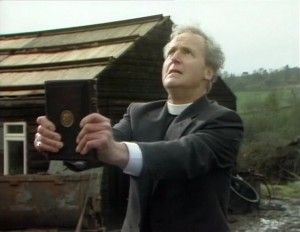 One of the characters is a vicar. Rev. Wainwright is having a crisis of faith, triggered not by abstract religious questions but by the problem of evil. It is less that he has lost his faith in God than that he has lost his faith in humanity – as he says, he “used to believe there was good in the world.” Later, when confronting the hemovores or “vampires” which are in fact humanity’s future form, it turns out that they can be stopped by unwavering faith. But the vampires know the weakness of Wainwright’s faith: it was the fact that the British bombed innocent Germans, suggesting that even his own people opposing Hitler were not taking an absolute stance for good. And so he is overcome by them and killed. Other characters, however, have an absolute faith that is more powerful. We don’t learn what the Doctor’s faith is in (UPDATE: We do: click through for more information), but we do see that a Russian soldier’s faith in Communism and the revolution is more effective than the vicar’s diminishing faith. And so he can hold out a pin with a hammer and sickle and drive them back, much as is typically done in movies with a cross! The vicar’s earlier attempt to use a Bible in that way failed, however, because it is not any object but absolute faith that can overcome them and drive them back.

Christian religion also appears in the episode, in more stereotyped fashion, in the form of an old woman who condemns the girls living with her during the war to “hell and damnation” because they went swimming.

There is an intriguing moment when the Doctor is asked whether he has family and says that he doesn’t know – which the human questioner assumes is a reply reflecting the uncertainty many had during the war as to the safety or otherwise of their families.

The mythology that the episode introduces is akin to Zoroastrianism. The Doctor describes two forces, good and evil, in conflict with one another. Good overcomes evil and creates the universe, but somehow evil survives. And the Doctor had encountered the force of evil before and had challenged it to a game of chess, defeating it with a puzzle and trapping it in the shadow dimension for seventeen centuries. The language is reminiscent of the Book of Revelation’s notion of the Devil being bound for a thousand years (and there is even a reference to the “great serpent”). The chess puzzle is insoluble because the solution is for the black and white pieces to work together – a symbol of the only way that evil can be defeated, which is when those who’ve been aligned on opposing sides cooperate to overcome it, which is in fact what happens in the episode.

Ace’s character reaches more milestone in the psychological therapy the Doctor seems to be providing through the journeys he takes her on. Here, on the one hand, we witness her saying that she is not a kid any more, and using her feminine allure to distract a guard. On the other hand, she encounters her mother, whom she hates, as a baby, without realizing that it is her mother, and comes to love the baby, finding herself conflicted when she realizes that the two are the same person.

This episode is of obvious interest to anyone following the treatment of religious themes in Doctor Who. At one point it comes very close to the scenario in “The God Complex” in which the Doctor has to undermine the absolute faith of his companion in him. The Seventh Doctor does so rather more brutally than the Eleventh!

Have you seen “The Curse of Fenric“? What do you think of it, and in particular its treatment of religious themes?

October 9, 2012 The Doctor's Faith
Recent Comments
3 Comments | Leave a Comment
"The stained glass art is by Marissa Garner: https://www.etsy.com/shop/0..."
James F. McGrath Christianity and Science Fiction Conference
"As I have emphasized in previous posts about this topic as well as in my ..."
James F. McGrath “To Your Tents, O Israel!” A ..."
"No it isn't Judeans....It's clearly a theological description - not an ethnic oneJohn 49 The ..."
Bones “To Your Tents, O Israel!” A ..."
"Your whataboutism is classic deflection of Israel's policies in the west Bank.You don't give a ..."
Bones Understanding Whiteness
Browse Our Archives
get the latest from
Religion Prof: The Blog of James F. McGrath
Sign up for our newsletter
POPULAR AT PATHEOS Progressive Christian
1