The Bible, Inspiration, and Fundamentalism

Chris Heard was “inspired” by a recent blog post of mine to share some thoughts on his blog about the Bible and inspiration.

First, let me emphasize that, had the terminology of “inspiration” been widely used in the Bible as a way of indicating the distinctive character of sacred texts, I would not have made the proposal that I did, that English speakers “mean what they say” when using the term. If this were a discussion about a Biblical term, then obviously looking at the “plain meaning” or any meaning of the English word that translates something in Greek or Hebrew would not be the way to draw conclusions.

It is interesting to see just how infrequently the term “inspired” and related words appear in English translations of the Bible. Where it does occur, it renders a very varied number of expressions in Hebrew and Greek, with more literal meanings ranging from “the Spirit of the Lord spoke, and his word was on my tongue” (2 Samuel 23:1) to “the oracle” (Proverbs 30:1) to “the man of the spirit” (who in Hosea 9:7 is said to be demented – using the Hebrew word from which the Yiddish meshugganah derives).

In all of these instances, the very act of a particular song or passage being marked out as “inspired” implies that the author of the book in which the oracle or inspired speech is embedded is not claiming the same status for the work as a whole.

Be that as it may, it is problematic to group such diverse phrases – which themselves leave open the nature of the phenomenon of inspiration – under the umbrella of the English word “inspiration” which itself is normally used for a broader phenomenon not limited to the writing of Scripture. But to the extent that the term is used, its breadth is precisely what makes it appropriate, because there is no single concept of “inspiration” in the Bible or in universally-accepted later creedal statements about the Bible.

In discussing creeds and the avoidance thereof by some Christians, Mason Slater hints at the actual order of logic for many of those who speak of Biblical inerrancy or infallibility in our time:

I believe it, the Bible says it, that settles it.

One almost misses the days of the classic fundamentalists, whose stand, however problematic, was typically about things that could actually be found in the Bible, and not about the defense of the free market and the right to own a gun. The era we live in, in which large numbers of people believe that the Bible is inerrant, and because they are unfamiliar with the Bible’s contents, merely assume that their own views are what the inerrant Word of God articulates. It is a dangerous combination. And so it is crucial to emphasize that merely believing something is not good enough – as this image shared on the blog Unreasonable Faith nicely illustrates: 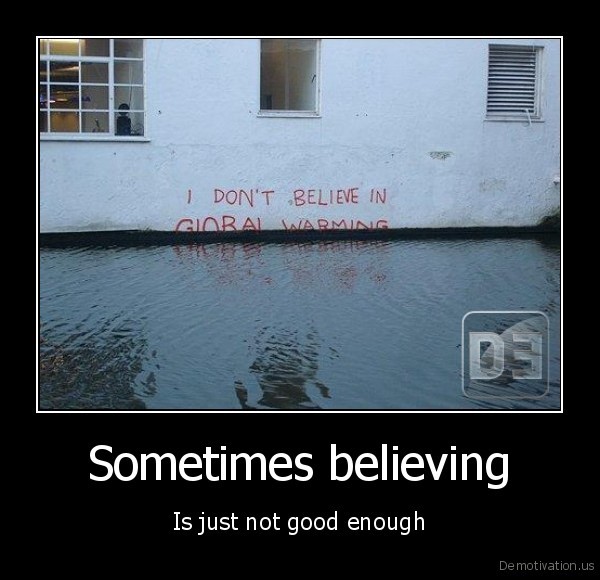 We need to move away from the idea that, when the head and heart seem to be in tension, faith and appropriate religious expression are always on the side of the heart – and this is nicely illustrated by a cartoon by David Hayward: 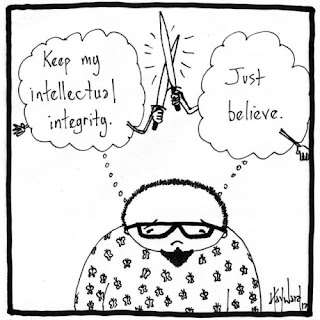 On this and related topics, see Chris Heard’s next post in what promises to be a series, and Roger Olson’s explanation of what he means when he says that the Bible is “trustworthy.” Andy Byers emphasizes that the Bible is very hard to read. And Alden Swan has a post on the ways churches today typically misunderstand Romans, and why.