One more meme image that came to my attention on the theme of creationism: 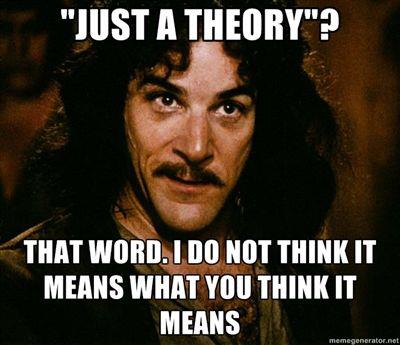 To be fair, in popular usage, the word “theory” does indeed get used regularly for a hunch or worse – after all, we talk of “conspiracy theories.” So perhaps we should spend less time blaming people who have little science education for misunderstanding the way scientists use the term, and more time explaining to them that, in science, a theory is an organizing framework which interprets and allows us to make sense of a wide array of evidence. And so “the theory of evolution” is not like a “conspiracy theory.” It is like universal gravitation or general relativity – a well-established, well-tested explanatory framework that fits the evidence well.

If we can get a larger number of people simply to grasp that most scientists find the theory of evolution to be a good fit to the evidence, and that most scientists are not stupid or incompetent, we will have made real progress with respect to the public understanding of science. At present, even such basics seem to be inaqequately grasped by many – in the United States, at least.

November 30, 2012 Do You Trust Your Eyes?
Recent Comments
1 Comment | Leave a Comment
"Here's a question about Jesus being given a dishonorable burial, and whether this story element ..."
John MacDonald Revisiting the Empty Tomb
"Actually when one learns more about genealogy one discovers that this kind of interconnectedness, far ..."
James F. McGrath Powers and Principalities in the United ..."
"Since Isaiah 53 isn't about Jesus in its original context, it doesn't seem as though ..."
James F. McGrath Jesus according to AI
"Hahahahaha, I am not the only one ,hahaha. The Beegesus. Sorry. I mean no harm ..."
mark demell Jesus according to AI
Browse Our Archives
get the latest from
Religion Prof: The Blog of James F. McGrath
Sign up for our newsletter
POPULAR AT PATHEOS Progressive Christian
1