Just How Racy is the Song of Songs?

Today my class on the Bible focused on Song of Songs. This was my first time including the text as a focus. With so much to cover in a semester, it seemed in the past to be an obvious choice for something to leave by the wayside. But since it is highlighted in the textbook I am using for the first time this semester, The Back Door Introduction to the Bible

, and since it illustrates just how diverse the contents of the canon are and just how different an outlook on sex some ancient religious people had than many modern ones, I thought I’d devote a class to it and see what happens. This post focuses on one of the topics we ended up talking about.

Everyone acknowledges the similes. The only debate is whether saying that someone’s teeth are like sheep was more of a turn-on in ancient Israel than it is today for everyone I’ve ever spoken to. 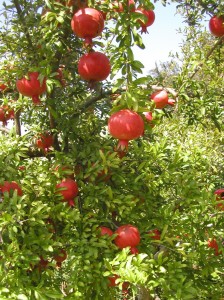 And what about in chapter 5? Anyone familiar with Biblical euphemisms will know that “feet” can refer to other parts of the body than just feet. And when it refers to the male lover thrusting his hand through the latch opening (5:4), do we have any evidence about ancient doors that would even make it possible to understand the language literally?

Many people associate the Bible with prudishness regarding sex. But anyone who has read it knows that the Bible – particularly the Hebrew Bible/Old Testament – is anything but prudish.

I’m curious what others who have studied or taught Biblical studies at university have done with the Song of Songs in class. Were students comfortable or uncomfortable with discussing the possibly racy metaphors? Apart from the novelty value for some students that there is erotica in the Bible, what other points were offered for students to take away from examining the text and reflecting on its presence in the canon?

November 29, 2012 Merry Christmas from Chiron Beta Prime
Recent Comments
14 Comments | Leave a Comment
"Under the old covenant (ten commandments), people were (and still are) racists and sexists. For ..."
Herrnhut Was Jesus a Racist?
"Reconciliation is a two-way street, restoring a broken relationship between two people. God does indeed ..."
Iain Lovejoy Forgive Us Our Debts, Not Repay ..."
"Excellent. God is not, and does not want to be, an accountant; keeping a ledger ..."
Harvey James Johnson Forgive Us Our Debts, Not Repay ..."
"Don't confuse forgiveness with reconciliation. Jesus tells us to forgive people who sin against us, ..."
Derek Thompson Forgive Us Our Debts, Not Repay ..."
Browse Our Archives
get the latest updates from
Religion Prof: The Blog of James F. McGrath
and the Patheos
Progressive Christian
Channel
POPULAR AT PATHEOS Progressive Christian
1