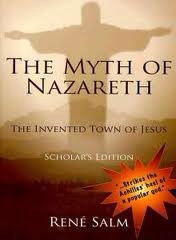 It has been a while since I have blogged about mythicism. But several mythicism-related blog posts have appeared over the past day or so.

I will start with the most entertaining. Rene Salm managed to get a paper accepted at SBL, and not only has he shared his paper online, but at the blog Vridar there are also excerpts from Salm's account of the conference. Apparently he saw me there, and based on his description of me and his comments about my paper, my smile and lack of stature were sufficient to prevent him from grasping what I said and why I said it.

His complaints about my scholarly nuance and caution, his conviction that one should put greater trust in Mandaean sources written centuries after the time of John the Baptist while he doesn't trust early Christian sources to get a village's existence right mere decades later, and his claim to be simply saying what archaeologists say about Nazareth when no professional archaeologist agrees with him, will all provide you with hours minutes seconds of hilarity.

On his blog, Bart Ehrman has been sharing his discussion of Salm and his claims about Nazareth from his book. Since Salm has nothing new to say on the topic, there was obviously no need to write something new in response. Nor is Salm likely to ever have anything genuinely new to say on the topic, since he doesn't actually do archaeology. He listed his affiliation as “University of Oregon” on the SBL program. but his degrees from there are in music and German. (And since I was unable to make it, I would like to hear from someone who actually attended the session where Salm presented about what transpired there.)

Also on the subject of mythicism, Thomas Brodie recently revealed that he is a mythicist and has been one for decades. Richard Carrier has read his book and explains why Brodie's reasons for adopting this view are unsound.

November 29, 2012
The Most Interesting Bible in the World
Next Post

November 29, 2012 25th Annual Butler University Undergraduate Research Conference
Recent Comments
30 Comments | Leave a Comment
"Under the old covenant (ten commandments), people were (and still are) racists and sexists. For ..."
Herrnhut Was Jesus a Racist?
"Reconciliation is a two-way street, restoring a broken relationship between two people. God does indeed ..."
Iain Lovejoy Forgive Us Our Debts, Not Repay ..."
"Excellent. God is not, and does not want to be, an accountant; keeping a ledger ..."
Harvey James Johnson Forgive Us Our Debts, Not Repay ..."
"Don't confuse forgiveness with reconciliation. Jesus tells us to forgive people who sin against us, ..."
Derek Thompson Forgive Us Our Debts, Not Repay ..."
Browse Our Archives
get the latest updates from
Religion Prof: The Blog of James F. McGrath
and the Patheos
Progressive Christian
Channel
POPULAR AT PATHEOS Progressive Christian
1