Jim West shared this cartoon (for what reason I will not speculate): 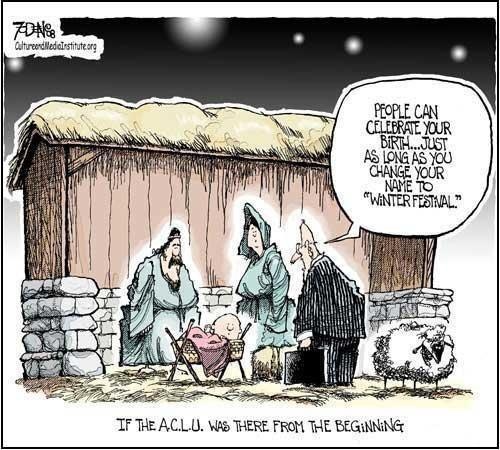 I find the cartoon bizarre. I don't think that whoever made it has any concept of either the setting into which Jesus was born or how religious freedom is safeguarded in the United States in ways that were unimagined then.

Back then, there was no American Civil Liberties Union. Emperors and kings ruled and if they didn't approve of your religion, you faced persecution and death.

The only thing you can't legally do is use government property and government institutions to display, promote, and/or advance your religion. That is not an infringement of your religious freedom, it is protecting your freedom and others by preventing the use of state power or influence to promote a particular religion.

In other words, it is pretty much the opposite of the situation in Jesus' time. And it has proven an effective way of safeguarding religious freedom.

And so I can only shake my head at the misinformed cartoonist who knows so little about both history and the present day, that they could really think – or at least pretend – that there was religious freedom in Jesus' time while things are worse in ours. The opposite is the case, and as a Christian and more specifically a Baptist, I am thankful for the separation of church and state that safeguards my religious freedom and yours.