Is Your Jesus a Spoiled Brat?

David Hayward is on a roll this week. Here’s his latest cartoon: 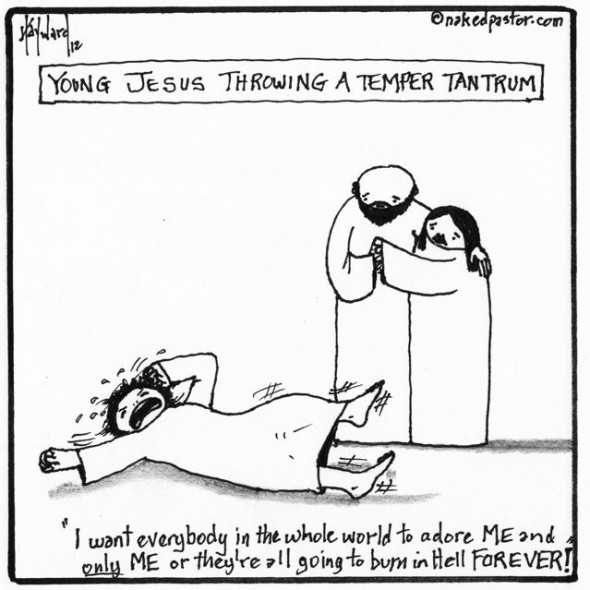 You’d think he would have outgrown this narcissistic attitude by the time he became an adult.

But… according to many… apparently not.

This is really insightful. The God and the Jesus that many conservative Christians envisage is one who is narcissistic and immature.

Just think about it. Really give it thought. If depicting God as an entity that would say “You won’t adore me? Fine, I’ll show you – I’ll torture you for eternity!” seems anything but a depiction of God as reflecting the worst traits found in human beings, then I can only guess that perhaps you too have some maturing to do, and have a god made in your own image, even if you have managed to persuade yourself that it is the other way around.

For those interested in ancient Christians’ treatment of this topic, take a look at the Infancy Gospel of Thomas (which should not be confused with the Gospel of Thomas). It depicts Jesus as a spoiled and immature child who nonetheless possesses great power dangerous in his hands. Fortunately by the end of the work, as it dovetails into the New Testament, it suggests that he has matured significantly.

December 8, 2012 Happy Hanukkah!
Recent Comments
56 Comments | Leave a Comment
"Under the old covenant (ten commandments), people were (and still are) racists and sexists. For ..."
Herrnhut Was Jesus a Racist?
"Reconciliation is a two-way street, restoring a broken relationship between two people. God does indeed ..."
Iain Lovejoy Forgive Us Our Debts, Not Repay ..."
"Excellent. God is not, and does not want to be, an accountant; keeping a ledger ..."
Harvey James Johnson Forgive Us Our Debts, Not Repay ..."
"Don't confuse forgiveness with reconciliation. Jesus tells us to forgive people who sin against us, ..."
Derek Thompson Forgive Us Our Debts, Not Repay ..."
Browse Our Archives
get the latest updates from
Religion Prof: The Blog of James F. McGrath
and the Patheos
Progressive Christian
Channel
POPULAR AT PATHEOS Progressive Christian
1