Keep Christ in the Mayan Apocalypse 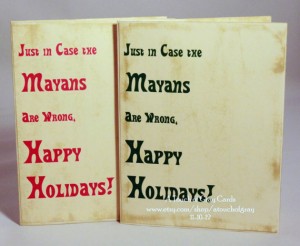 Too many undiscerning Christians (apparently including the majority of those who live in Russia) have been duped and thus fail to realize that the Mayan prediction of the end of the world on December 21st 2012 is simply another salvo in the war on Christmas. You don’t think the ancient Mayans set the date for the apocalypse so close to the day we celebrate Jesus’ birth just by accident, do you?

The aim is presumably to prevent people from buying present, putting up decorations, or drinking too much, out of concern  either that they will be ill-prepared for the apocalypse, or that their efforts will be wasted.

I therefore call upon all Christians everywhere to not allow this attack on Christmas to set them back. Do your Christmas shopping. Hang decorations. Wish people a Merry Christmas right away – the sooner the better, and definitely before the 21st. Ignore the pagan Mayan calendar, and do not under any circumstances wish someone a “happy apocalypse” or a “merry end of the world.”

Also, recognize that this is not merely an attack on Christmas but an attack on Advent. With all the countdown clocks around the web, people are bound to get confused about which are counting down to Christmas and which are counting down to the end of the world. Make sure you are not led astray! There is only thing that is a more serious attack on Christmas than predicting the world will end just before it, and that is getting your countdowns mixed up and finding yourself celebrating Christmas several days early.

But most importantly, don’t let the sort of Mayan grinchiness reflected in the card below infect your spirit! 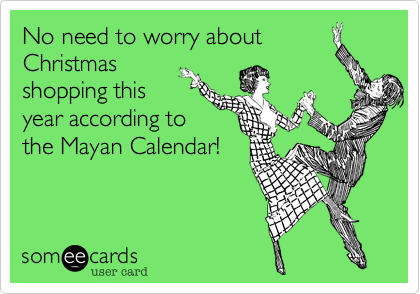 [DISCLAIMER: The above post is intended as satire. Anyone suffering from SDDS (Satire-Detector-Deficiency Syndrome) should not read it.]

December 2, 2012 Clone Troopers Nativity
Recent Comments
7 Comments | Leave a Comment
"Yeah, famously there is the debate over "machete order" in which it is proposed that ..."
Scurra Revisiting Revisiting Star Wars
"It's a moot point. Trump is clearly the Squire of Gothos."
Todd Gordon Donald Trump vs. the Kobayashi Maru
"I will restate my conviction that it is also entirely possible that there are, in ..."
Scurra Is It Reasonable To Believe In ..."
"The truth is that there is very little truth in any of the mythological books ..."
rationalobservations? The Truthiness Will Set You Free
Browse Our Archives
get the latest from
Religion Prof: The Blog of James F. McGrath
Sign up for our newsletter
POPULAR AT PATHEOS Progressive Christian
1