, and am grateful to Zondervan both for running with the idea and turning them into a real product, and for sending me a set to review.

Other than among people who play Pokemon or CCGs, I am not sure how popular the collection of cards is among young people today. I know that sports fans were avid collectors of baseball cards when I was young, while I am sure that if I had hung on to my Star Wars trading cards, I would not have regretted it.

But be that as it may, not only could I see the Theologian Trading Cards causing a resurgence of the trading card phenomenon, and not only do I think that every theologian ought to have a set of these under their Christmas tree this year, but also, as an educator, I have already begun thinking of ways that these cards could be pedagogically useful to those who teach theology.

In order to think further about the topic, I brought my friend and colleague Brent Hege into the discussion. He quickly made it clear that Bultmann belongs more to theologians than to New Testament scholarship, and thus I would not be getting that card back: 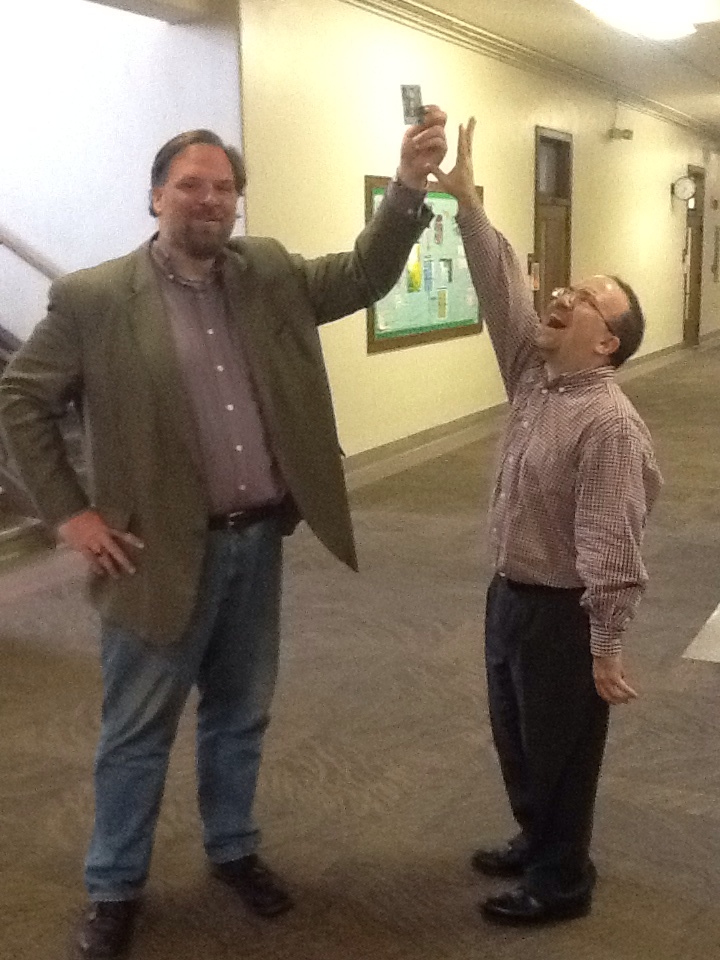 His height advantage proved decisive in keeping me at bay. Since he is a Lutheran, I didn’t expect him to know the move in the photo below, which seemed simultaneously to keep me from reaching the card, and to impart a blessing: 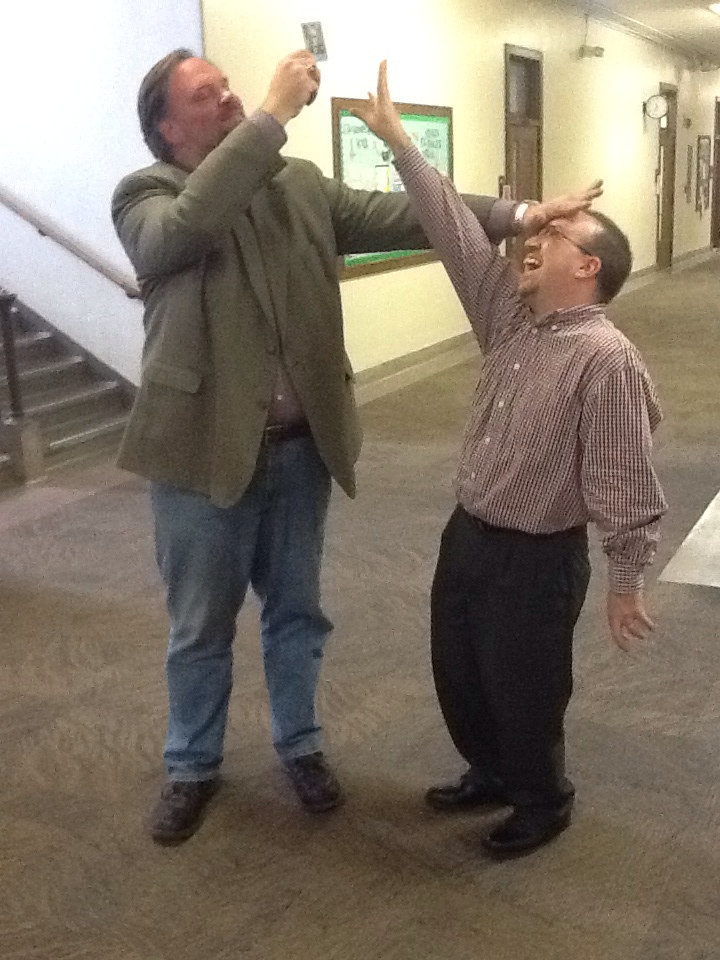 Since he is a Lutheran and a theologian, his interest in the card was understandable. My colleague Chad Bauman is in neither category, but his Mennonite background made him interested in a particular card too, that of Jacob Amman. He was able to walk off with it without resorting to violence, as is appropriate to the Amish tradition – not that there was anyone around interested in fighting him for it! Now, if he had tried to take my James D. G. Dunn card, or my John A. T. Robinson, who knows what might have happened… 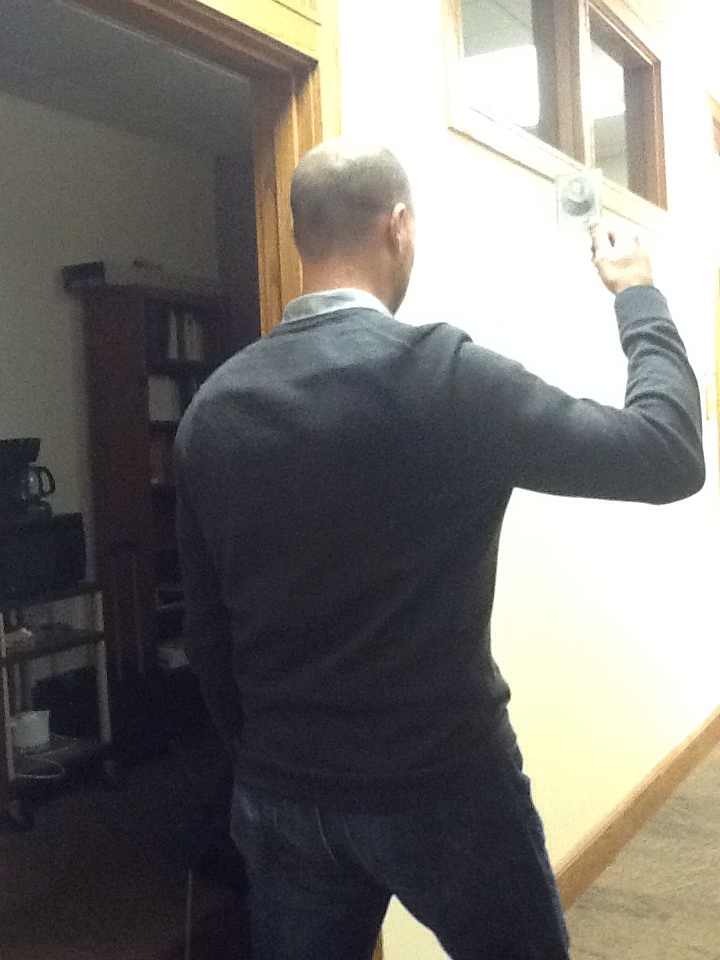 But on a more serious note, while my colleagues and I were taking these (clearly staged) photos and having some fun with the cards, I came up with some ideas for ways that a professor of theology or church history could use these cards in teaching. For instance, students might be required to pick a card at random from the shuffled collection, research the views of the theologian on the card they chose, and then have to dialogue with another student who was depicting the views of the person on their own card.

Beyond the classroom, I could see people playing a theological version of the card game “War.” Two players put down a card each, and the winner gets both cards. Obviously most games might only last one round, with most of the time spent debating which card – or rather, which theologian – “wins” and why. But that would be precisely the fun of it. I would love to listen in on such a discussion pitting Menno Simons and Dietrich Bonhoeffer against one another…

The cards are organized into teams (the heretics, for instance, are the “Orthodoxy Dodgers”) which are color-coded, as with other sorts of trading cards. Each card contains facts about the individuals in question. Most have a photo or image of the person (for those that don’t, I suppose that no public domain image was available). And there is a card suited for everyone – even Jim West. My colleague Paul Valliere works on Russian Orthodoxy, and I was able to show him the Bulgakov card, which he thought was great. There are even some blank ones in the box so that you can make your own!

are a brilliant idea. They will make a great novelty gift for anyone interested in theology. But I would encourage anyone who teaches theology or church history to get a set for professional use, as I think that there are numerous creative ways that they can be used for teaching purposes.

I believe that Zondervan has some signed trading cards to give away, and which I will be able to hold a competition for, to offer one or more such cards to blog readers. Yes, like the sports cards, we are talking about cards signed by the theologian who is on the card. I will provide more information about that with full details in a separate post. And I will plan on taking some of my own cards with me to AAR/SBL next year to get some of them signed, if I can!

December 7, 2012 Santa Parkour
Recent Comments
1 Comment | Leave a Comment
Browse Our Archives
get the latest from
Religion Prof: The Blog of James F. McGrath
Sign up for our newsletter
POPULAR AT PATHEOS Progressive Christian
1