What The Wise Men Forgot 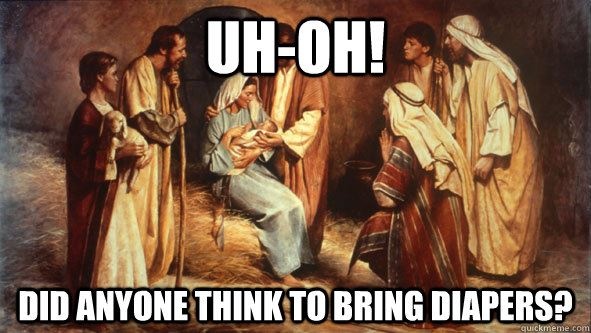 I saw the image above on Facebook and wanted to share it here. The Gospel of Matthew depicts the magi coming to Bethlehem when Jesus is around 2 years old. For all their reputation as “wise men” they didn’t exactly bring practical gifts. Whether he might have already been potty trained is more of a type of question – Luke depicts the young Jesus as ahead of the curve. And the figures in the image look a bit more like the traditional depiction of Luke’s shepherds than Matthew’s magi. But would shepherds watching their flocks by night have diapers with them?

At any rate, I thought that the image was more than just an amusing bit of Christmas humor. For many Christians, it can be a decisive test of whether or not they are heretics. If the idea of Jesus needing diapers, or having bowel movements, is offensive or outlandish to you, your Jesus is a figure of your imagination and not a real human being. And that is directly contrary not only to the Chalcedonian Creed, but more importantly, the historical evidence.