In the wake of tragedy, we may view things differently.

While some at church this morning spouted offensive platitudes (despite the pastor’s explicit mention of the pain they cause and their inappropriateness), I found myself thinking about the text of the sermon, about the massacre of the innocents in Matthew 2. 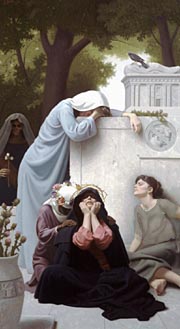 In the story, it is God who alerts Herod to the birth of a king in Bethlehem. The star is obviously not a real star, since it could not lead people to a specific house. But in the story, it brings the Magi to Jerusalem first, alerting Herod and sending him down the path of planning murder.

God is then depicted as warning the Magi and Joseph about Herod, but choosing not to warning the other families in Bethlehem.

If Matthew had had more sympathy towards those who lose children, and more theological concern not to depict God in a manner that people would eventually find morally problematic, he could have used his imagination and added still more details to the story he concocted. He could have had the other parents in Bethlehem also be warned, so that the soldiers reached Bethlehem and found no one with young children, and realizing that God had accomplished a miracle, they could then have gone back to Herod and told him that the mission was accomplished.

But Matthew was content to depict God as more like a human being in our less generous moments. God is depicted here as concerned with his “team” – special guests he invited from afar, and of course his son, but although Jesus is to be the Savior, for some reason Matthew chose not to have God act to save innocent children, but instead to actively bring about their slaughter by making Herod aware of the birth of one who will be king of the Jews.

Aren’t you glad that we have no reason to think that this story Matthew tells actually happened?

Instead, we can attribute it to the shortcomings of Matthew. And we can take a lesson from it.

Real life includes murders and tragedies – like that which happened in reality at Sandy Hook Elementary School in Connecticut recently, and like that depicted in story in Matthew’s Gospel.

But when we insert God as a character and say that God acted to save some, we turn God into a monster who chooses for inscrutable reasons to spare some but lead others to the slaughter.

Do we not do better to simply express our gratitude and our relief for those who survive, and our mourning and heartache for those who died and for their families in the midst of indescribable grief?

When we try to introduce divine action into the story, the God we portray is one that few will find it appropriate to thank. Those who will are those who are concerned for their own comfort, and not the comfort of those who are most affected by the tragedy.

In Matthew’s story, it doesn’t matter so much, since we have no evidence that young children in Bethlehem were in fact slaughtered as per Matthew’s story. More likely, Matthew is working in details from the story of Moses in order to highlight the similarity between Moses and Jesus.

But try as we might, when we seek to work a divine plan or miraculous interventions into the stories, we never end up depicting God as just, but rather an unjust.

I think we are better off sitting quietly, sobbing, weeping, and if we are near to the one whose loss is greater than ours, hugging. Don’t try to offer explanations. Would any explanation offered be a comfort? If the mothers and fathers of Bethlehem really did experience the things Matthew described, and then read Matthew’s account, would they find it comforting or simply adding to their pain, depicting a God who takes care of others but inflicts heartache and misery on them?

There are places in Scripture where it seems that an author has failed to fully live up to and write in a way that does justice to some of the most lofty principles Scripture calls us to aspire to. I think Matthew’s story is an example of that. While he manages to highlight parallels between Jesus and Moses, he does so at the expense of not showing sympathy towards those who mourn.

Or maybe he never imagined that anyone would think his story was literally factual in all its details, the way some today assume it to be?

There have been conflicting accounts circulating about some details regarding what happened in Newtown, Connecticut just days ago. But one thing we know is that it is a true story of the slaughter of innocents.

And so I appeal to you: Don’t make the same mistakes Matthew did. Because here you are dealing with real tragedy, real loss of life. And the harm your words can inflict is real.