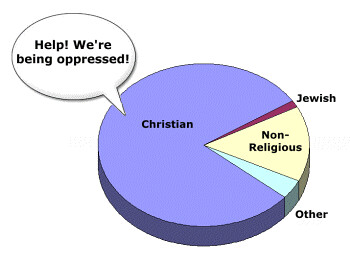 It is interesting to see what else has appeared in the blogosphere since I posted about conservative Christians' persecution complex this morning.

Christopher Skinner shared the news today that Cedarville University is now apparently trying to rid itself of its philosophers, having successfully ousted Michael Pahl, much as other institutions recently did in the cases of Christopher Rollston, Anthony Le Donne, Peter Enns, and others.

Meanwhile, an update on what such Christians consider “persecution.” Branson Parler at the blog Think Christian posted on Christians' persecution complexes today, concluding with the following insightful sentence:

There is still a battle raging, but it is not a battle for general acceptance on the American public stage. So long as Christians think it is, we may have already succumbed to the temptation of our true Enemy.

And Ken Leonard wrote in a comment on my blog wrote:

Nero fed Christians to lions. In Iran, Christians fear for their lives. In China, members of churches not approved by the state face life in prison. In the US, employers are expected to have their health care plans cover health care and can't force other people to pray.

That pretty much sums it up. But I will add this image from Jon Stewart, which I think needs to be tweaked to reflect Thomas Jefferson, but otherwise makes a valid point: 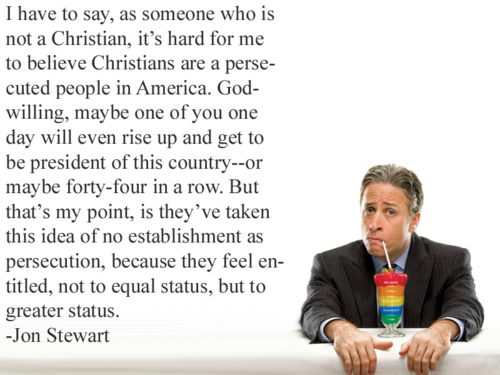 January 13, 2013
Christians and Persecution, Then and Now
Next Post

January 14, 2013 C3PO Visits Canterbury Cathedral
Recent Comments
18 Comments | Leave a Comment
"Who are "those people"?ad hominem argument is a logical fallacy."
Isa Kocher Revisiting Mythicism
"I'm working on an article on mythicism that will hopefully be out on Secular Web/Internet ..."
John MacDonald Revisiting Mythicism
"Thanks for that Napoleon book link. It was a most enjoyable way to pass some ..."
Scurra Revisiting Mythicism
"The one thing we can gather about the ages from John's version (leaving aside questions ..."
яовэят ёскэят 😘 Gospel Nudity
Browse Our Archives
Related posts from Religion Prof: The Blog of James F. McGrath

Evangelical binary thinking: "You can't be a Christian...
The world is full of complexity, yet in the evangelical mind, so...
view all Progressive Christian blogs
What Are Your Thoughts?leave a comment
Copyright 2008-2021, Patheos. All rights reserved.
Close Ad