In a blog post today, Pete Enns asked whether an Evangelical institution of higher education can be truly academic and committed to academic freedom. It is an issue that has been garnering a lot of attention, particularly in connection with the administration at Emmanuel Seminary's effort to get Christopher Rollston to leave – a situation depicted wonderfully in this cartoon by Dan McClellan: 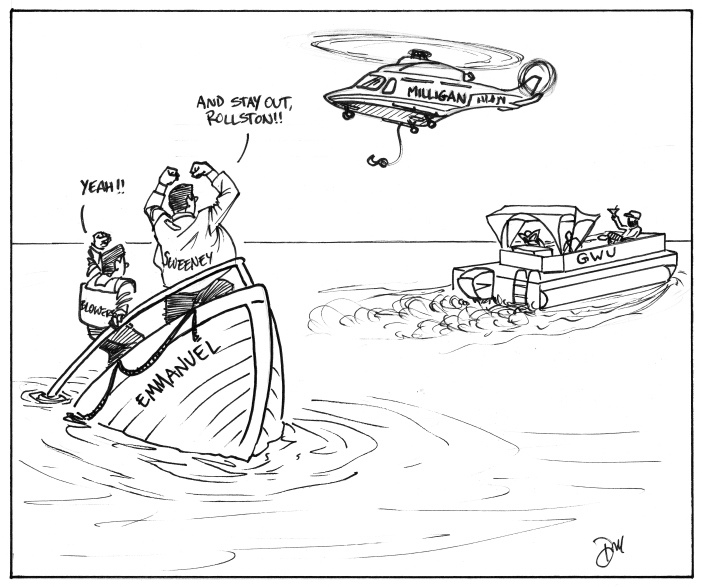 The cartoon is from a blog post by Bob Cargill on winners and losers in the whole Emmanuel Seminary affair.

Also announced in the blogosphere today by Jim Linville is a session at next year's SBL on academic freedom in the field of Biblical Studies. See the call for papers on Jim's blog or on the SBL web site. I hope that Pete Enns, Christopher Rollston, and Anthony Le Donne (among others) will consider presenting. I'd also be interested in doing so, having caught a glimpse when working in Romania of the broader global impact when American Evangelicalism's doctrinal concerns are exported and imposed elsewhere in the world.

You can read some of my own thoughts on this topic in a blog post from last May, “Time for the End of the Sectarian University?” (and also one from last February, on the spectrum that runs from apologetics and indoctrination on the one end, to the ideal of education that emphasizes critical independent thinking on the other).

In not entirely unrelated news, Indiana State Senator Dennis Kruse – yes, the same one behind the bills seeking to promote creationism in public school science classrooms – tried to propose a law requiring the recitation of the Lord's Prayer in public schools. I say it is not unrelated because the desperate attempts to influence children while they are young, and to prevent them from being influenced as adults in higher education, are two sides of the same coin, and reflect a form of religion that is scared out of its wits, because it understands its faith to involve clinging to untenable propositions in spite of mounting evidence against them. And that brings us back to the question with which we began: can a religious outlook that fears challenges from other ideas and viewpoints ever foster an educational and academic environment, when such challenges are a key part of what education is all about?

January 5, 2013 Fundamentalist Cognitive Dissonance
Recent Comments
9 Comments | Leave a Comment
Browse Our Archives
get the latest from
Religion Prof: The Blog of James F. McGrath
Sign up for our newsletter
POPULAR AT PATHEOS Progressive Christian
1