Someone I know shared this “joke” on Facebook. I left a comment expressing my disappointment that they had shared it, since it seemed to me to have racist overtones. Let me share it and see whether others get the same impression, before I say more.

Flying on Air Force One, Obama looked at Oprah, chuckled and said, ‘You know, I could throw a $1,000 bill out of the window right now and make somebody very happy. 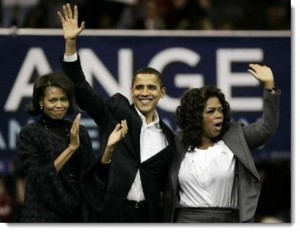 Oprah shrugged her shoulders and replied, ‘I could throw ten $100 bills Out of the window and make ten people very happy.

Michelle added, ‘That being the case, I could throw one hundred $10 bills Out of the window and make a hundred people very happy..

Hearing their exchange, the pilot rolled his eyes and said to his co-pilot, “Such big-shots back there. I could throw all three of them out of the window and make 256 million people very happy.’

*Note to Liberals, yes we know there are over 300 Million people in the USA, but the majority of America hates what is happening under this administration! So get over it!

Did you take it the same way I did? If I thought this were simply a political joke, I would not have batted an eyelid about it. Lowbrow jokes at politicians’ expense are universal across the board.

But it seems to me that, if this were a political joke, then it would have featured different characters. Unless the maker of the joke wants to have a Biden administration rather than an Obama one, then Biden ought to have been part of the joke – indeed, he would have to be, for it to make sense. Unless he gets tossed off the plane, in the story, then he becomes president. And I don’t think that is what the creator of the joke was hoping for.

Instead, the pilot of the plane proposes throwing three individuals out of the plane who would all be placed in the category of “African-Americans” (a categorization which I find problematic in and of itself).

Since I’ve made some people I care about rather upset by commenting on this on Facebook, I thought I would ask what others think.

Am I wrong to see this as a racist joke rather than a political one? The person who made it may or may not have been conscious of the racism inherent in it. But racism does not have to be conscious or intentional in order to be present.

When someone you know posts something like this on Facebook, do you leave a comment indicating your disappointment or concern, and if so, how do you go about it?

January 3, 2013
One of the Wise Men is about to have an Epiphany
Next Post

January 3, 2013 Doctor Who: The Sea Devils
Recent Comments
39 Comments | Leave a Comment
"This is genuinely fascinating, but as an inveterate nerd, I must ask -- where's the ..."
Spirit Plumber Guest Lecture and Academic Minute on ..."
"Yes, I agree. Technical arguments which supposedly prove (or disprove) the Resurrection are a waste ..."
David M Copycat Anti-Religion
"I think healthy skepticism is warranted in the case of Calvin and Colombetti's argument. We ..."
John MacDonald Copycat Anti-Religion
"And happy April Fools! I hope you're getting your prank on! https://www.youtube.com/wat..."
John MacDonald Barton Breen Quote About Inerrancy
Browse Our Archives
Follow Us!

LBCF, No. 266: 'The Cleansing'
The authors believe that some people are basically good and therefore not at all...

Faith in a Time of Pandemic - This...
XXI. THIS LITTLE LIGHT OF MINE (4-3) You are the light of...
view all Progressive Christian blogs
What Are Your Thoughts?leave a comment
Copyright 2008-2020, Patheos. All rights reserved.