Doctor Who: Colony in Space

The Doctor Who episode “Colony in Space

” from the Jon Pertwee era sees the Doctor sent on a mission on behalf of the time lords, although without his being informed of the nature of the mission in advance. It seems as though the confines of Earth felt too restricting not only to the character of the Doctor, but also the writers for the show. His exile did not persist for all that long, and was rescinded temporarily on more than one occasion.

The episode features many religious themes and references. The underlying premise is that the Master has stolen information about a doomsday weapon. The time lords send the Doctor to stop him, to a world where colonists as well as miners from Earth are trying to stake their claim. Earth has been devastated by human beings, and there is no longer any grass, which explains why people are seeking new homes. But one of the colonists says of the world on which they are trying to make a new home, “This isn’t exactly the Garden of Eden.”

The beings on this world once developed an advanced civilization, but after they developed the doomsday weapon, their society decayed and eventually what had been scientific achievement became the focus of “primitive religion.” And so this perennial theme on Doctor Who, particularly prominent in the Jon Pertwee era, gets a mention.

But as usual, there is more depth to the episode’s treatment of religion. Towards the end, as the Master contemplates using the doomsday weapon to hold the galaxy to ransom and become its ruler, he says “We could be gods!” To that, the leader of the natives says “You are not fit to be a god.” The point presumably being that divinity requires something more than mere power. 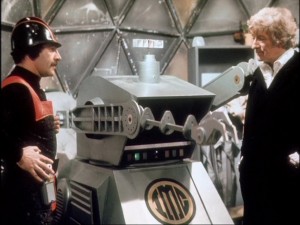 There are broader explorations of morality and ethical issues as well. The competing interests of miners seeking a mineral that will allow more housing to be built on the already overcrowded Earth, and the colonists trying to make a new home. Business ethics.  And the references to “primitives” offers an opportunity to explore postcolonial themes – especially as the so-called primitives are revealed to be descended from a once advanced society.

The episode features and makes reference to “papers” and “filing cabinets” – a depiction of the future that seems somewhat dated even a few decades from when the episode airs, to say nothing of an imagined 2472. But given the ease with which digital data can be lost or corrupted, it might well make more sense to bring a physical piece of paper on a long interstellar flight, than to take a thumb drive only to find its contents no longer accessible!

There is a lot of great food for thought and interesting starting points for conversations on topics of interest.

Here is an online video, should any of you wish to watch the episode:

February 5, 2013
Brace Yourselves: Evolution Weekend is Coming
Next Post