Several posts have come to my attention in recent days, related to the subject of liberal/progressive Christianity.

Roger Olson has a post on why he doesn’t self-identify as a “liberal Christian.” He offers interesting discussion of the terminology and his own understanding, which is worth clicking through to read. Towards the end he sums up as follows:

So what’s wrong with being liberal theologically in that way? I find it thin, ephemeral, light, profoundly unsatisfying. It seems to me barely different from being secular humanist. Sure, theological liberals (in the sense I have defined that type above) can be profoundly “spiritual,” but I don’t think they are profoundly Christian. Their commitment is greater to modern culture, the Zeitgeist of the Enlightenment, than to Christian sources. Their “Christianity” is barely recognizable if recognizable at all—compared with anything that was called “Christian” before the Enlightenment. Ultimately, I believe, theological liberalism robs Christianity of its distinctiveness, the “scandal of particularity,” its prophetic edge and makes it easy, respectable and dull.

I have to strongly disagree. The reason why liberal Christians are committed to the insights of science and other approaches to knowledge associated with the Enlightenment is because they are almost universally agreed to represent improvements on what went before, allowing us a better understanding of the world we live in. And there is no reason to think that, when pre-Enlightenment Christians adopt a stance different from that of the Enlightenment, it is because they had considered that approach and evaluated a different one as preferable. No, they differ from Enlightenment thinking simply and precisely because they lived before it. We can’t know what the Biblical authors (for instance) would have said about the Enlightenment. But I think I can safely say this: What made the Biblical authors have a prophetic edge in their own time is not merely the fact that they reflected more their own context than our own. If it were, then presumably liberal Christians, by reflecting our own time, would be automatically the most prophetic simply because of the ways in which we reflect our own time and context. Olson, by making pre-Enlightenment vs. post-Enlightenment worldviews the crux of Christianity, treats context as substance. It is a rejection of this view – that an ancient culture and its assumptions can be adopted by people today, and that that culture must be accepted along with the Gospel – that was the heart of Bultmann’s work on demythologization.

I hope Olson would agree that being prophetic in fact involves offering a challenge to the ways of thinking dominant in one’s own time – and that doesn’t mean simply preferring an earlier society’s consensus rather than our own, especially when the latter has shown itself to be an improvement. But embracing progress in science and other domains of inquiry is not undercutting what made those religious voices of the past powerful. It is allowing change from those things which which they took for granted because they were taken for granted by most people in their time. Of course, sometimes such changes do affect core beliefs. But if we look at the history of our faith tradition, including within the pages of the Bible, then we will see that across the passage of time, people have consistently not only preserved ideas and emphases, but changed ideas and assumptions and cosmologies and so on and so on. The idea that liberal comes along for the first time after the Enlightenment, to do away with things that remained unchanging until then, is at best a caricature – and one that is dangerous, inasmuch as it often insulates conservative Christians from those prophetic voices which point out that their allegedly timeless truths are often relatively recent interpretations of our shared tradition.

And I challenge Olson and anyone else to deny Martin Luther King Jr., a theological liberal, the right to be called prophetic – or to call him dull.

Of course, it is true that the majority of us who us who self-identify as liberal Christians do not live our lives as prophetically as King did. But if the failure of individuals to fully live and put into practice the ideals of their movement or community is a reason for criticizing the ideals themselves, then such criticisms will by no means be restricted to liberal Christians. Most human beings, and thus most worldviews, would find themselves subject to such criticism.

Frank Schaeffer also posted on a related topic, suggesting that Progressive Christianity is as broken as Evangelicalism. He suggests that the problem, shared in common, is this:

Generations of Christians through millennia would have been flabbergasted at the make-it-up-as-you-go-along aspect of modern Christianity that cuts across both fundamentalist and progressive denominations.

He suggests as a solution an acceptance of open-minded, mystical religiosity, but that it needs to be coupled with traditions of doing, things that can be relied on, customs which we have instilled with meaning, symbolism, and weight and which should not be so lightly discarded as many are prone to today.

We certainly see the mix Frank argues for in some churches and denominations – in particular Episcopals, who can be traditionally liturgical as well as theologically and socially progressive. But there is also the tendency to just innovate for its own sake. Which reminded me of this image that came my way on Facebook recently: 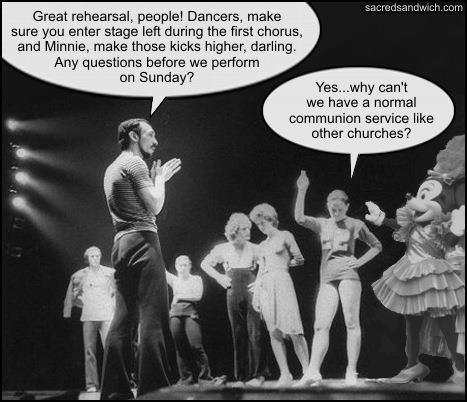 Of related interest are a couple of posts by Larry Moran. In one, he rightly emphasizes that not all atheists are skeptics. In the other, he discusses whether all skeptics are atheists. At least historically, the answer has to be no. Over the centuries, many Deists, pantheists, and Liberal Christians have not only self-identified as embracing skepticism, but have a proven track record of doing so. Skepticism is certainly incompatible with many forms of religious belief, and in particular those which posit supernatural entities for which there is no good evidence. But anyone familiar with the breadth of the phenomenon of religion, both historically and globally, will know that those are not the only options.

Also of interest are Sabio’s post on atheists who misunderstand religion, and John Dickerson’s piece on why Christians should be nice.