The student who presented today in my class on the Bible shared this meme image: 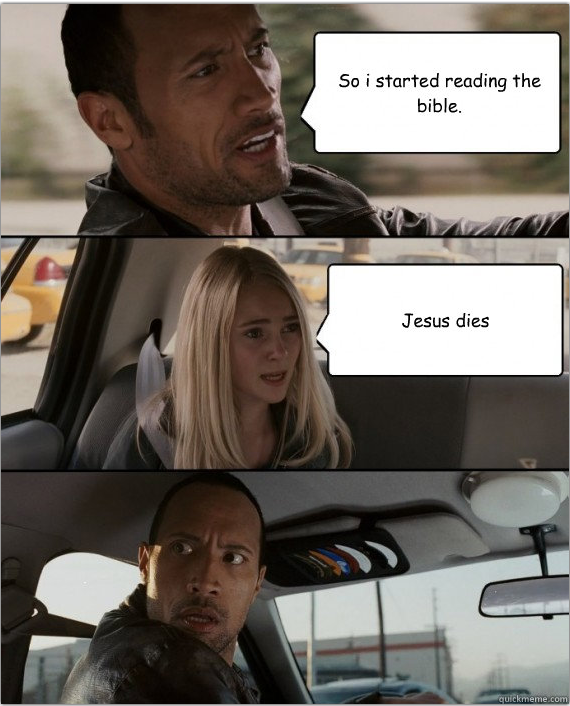 That Jesus dies is a spoiler only in the sense that the sinking of the ship is a spoiler for those who watch the movie Titanic. But what is noteworthy in the attempts at humor is the penchant for this to be thought of as the crucial moment in the Bible’s narrative, the turning point in history. And as a result, for some, it is viewed as the entirety of  what the Bible is about – as expressed in this image:

It is not inappropriate to take the occasion of Good Friday to reflect on the death of Jesus. But if one sums up the entirety of the Bible or the entirety of the life of Jesus in terms of “Jesus died” – even with the addition of “for you” – then one has probably failed to understand what is going on in the New Testament writings when so much attention is focused on the cross.

The idea that the crucifixion of Jesus is the key moment in history misses the importance the resurrection had for the early Christians. But even setting that point aside, the focus on the crucifixion is the result of the early Christians trying to make sense of what had happened to Jesus. The expectation regarding an “anointed one” of the line of David was for the restoration of the kingship to David’s dynasty. For someone claiming to be the awaited figure to then be executed by the Romans would have seemed to mean one of two things: God’s promises have failed, or the figure in question wasn’t really the one they were waiting for.

Christians managed to come up with a third option: God’s plan included the death of the Messiah.

Bo Sanders puts the matter nicely when he writes, “Believers, in those first few centuries, retro-fitted divine intention and design into Jesus’ death.”

From a contemporary progressive Christian perspective, this retro-fitting seems more problematic than the problem it was meant to solve. Saying that God’s plan is for specific individuals to meet horrific fates raises all sorts of issues that are perhaps best left for discussion separately or in the comments on this post.

It makes more sense, for me personally, to emphasize that Jesus represents what happens when someone dares to envisage a kingdom in which the poor are raised up, the oppressors are brought low, the marginalized are invited to be full participants, and all the other things that Jesus talked about.

Because unless we take seriously the fact that the cross, historically speaking, was human power seeking to stamp out a vision of human existence that was at odds with the aims of those in power, then we will not only fail to grasp the underlying core of events at the heart of these Christian stories.

We will also fail to understand why it it that we are so eager to focus on Jesus’ death interpreted as a sacrifice, and so reluctant to focus on his death as something which might happen to his followers if they genuinely follow in his footsteps.

This can be related to current events involving a classroom activity which asks students to stomp on the name of Jesus written on a piece of paper. The story at the center of early Christianity is about Jesus being stomped on by the powerful. Yet through the twists and turns of history, Jesus has become a symbol of power and privilege for some. Now, in response to someone proposing stomping on the name “Jesus” written on paper (in this case, as part of an exercise which was aimed precisely at illustrating the power of symbols, such as the name of Jesus has become), people who think they are following Jesus are eager to stomp on the professor.

There are two options for contemporary Christians. One is to treat the story of Jesus as about one who lets himself be stomped on, just so that his eventual stomping on them in retaliation is all the sweeter.

The other is to view Jesus as having really meant that retaliation is to be eschewed altogether.

I choose the latter. And I am glad that the occasion of Good Friday provides an opportunity to reflect on this important question at the heart of major divide between two different understandings of the Christian faith today.

Elsewhere in the blogosphere, do note the tackling of claims about pagan origins of Easter by Tom Verenna and Tom Breen (HT Joel Watts) and Tom Verenna. Brian Renshaw has posted the Greek text of John’s passion narrative with vocabulary helps (HT Jim West). Tim Kimberley has a GPS version of Holy Week. And Krista Dalton relates the death of Jesus to the death of the Bible.

March 29, 2013
Intertextuality and the Art of Persuasive Argumentation: SBL Paper
Next Post

March 29, 2013 Unfortunate Convergence
Recent Comments
15 Comments | Leave a Comment
Browse Our Archives
get the latest from
Religion Prof: The Blog of James F. McGrath
Sign up for our newsletter
POPULAR AT PATHEOS Progressive Christian
1