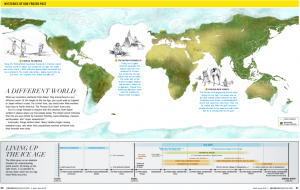 The Answers in Genesis web site has a fascinatingly amusing discussion (previewing an article in their magazine) about the timing of the Ice Age within the framework of their insistence that creation occurred 6,000 years ago. This means that they date the Pleistocene Era after the flood. The article cites evidence from radiometric dating, the evidence of which they dispute whenever it suits them. They also need to posit radically fast evolutionary changes to account for the differences in species between the ice age and the time of Abraham, in order to account for the differences between the fossil evidence for certain animals and their later counterparts. The whole thing illustrates just how bizarre a system of thought young-earth creationism is. All this to shoehorn data into a time frame that they insist on imposing, but which is not only at odds with all the scientific evidence, but isn’t even required by the Biblical evidence.

I continue to wonder whether the folks at AiG are working to make Christianity look as foolish as possible, even while claiming their aim is to promote it.

March 18, 2013 Is the Young-Earth Creationist Idea of God Compatible with Christianity?
Recent Comments
9 Comments | Leave a Comment
"Wasn't even aware of it."
James F. McGrath Revisiting Mythicism
"Did you get a chance to read Carrier's recent rant against you? See https://www.richardcarrier...."
John MacDonald Revisiting Mythicism
"Would literalist Christians reject the contents of Q knowing that they originate with John the ..."
Barros Serrano James McGrath at AAR/SBL in Denver
"These sound awesome!"
John MacDonald James McGrath at AAR/SBL in Denver
Browse Our Archives
Related posts from Religion Prof: The Blog of James F. McGrath